Make no mistake, the government’s reaction to COVID-19 — shutting down business, forcing people to state home, all the while granting monopolies to massive chains like Amazon, Walmart, etc. — has decimated the middle class and pushed the already-struggling poor that much deeper into despair. But you won’t see the owners of those monopolies complaining as they have seen their wealth soar to unprecedented highs.

As the rest of the country struggles to pay their mortgages, has their businesses shut down, and descends into poverty, COVID-19 for the super rich has been a record setting windfall. Four of the most controversial billionaires on the planet, Jeff Bezos, Bill Gates, Mark Zuckerberg and Larry Page have seen their wealth increase by hundreds of billions in just the last 10 months.

While these big movers receive constant coverage in the media, another group of billionaires on Wall Street were making insane profits off of the government-mandated shutdowns too. To be clear, making profit is a fantastic thing. Free trade among individuals is grand and creating excess wealth while doing so is a marvel of capitalism. But hedge funds don’t exactly play in a “free” market. They exist in a highly controlled market which allows them to rig the game and take in billions based on economic suffering.

The nefarious companies have a monopoly within the mainstream media and are able to go on TV or push an article out online and quite literally manipulate the market in their favor. During the pandemic, many of these hedge funds were going on TV and putting out information that caused some of the struggling companies’ stock prices to plummet. This is done on purpose so the hedge funds can them buy back the stock at a lower price through a process known as short selling.

In simple terms, short selling entails taking a bearish position in the market, hoping to profit from a security whose price loses value. But these hedge funds don’t just “hope” that these stocks lose value, they use their presence in the mainstream media and their government connections to ensure it.

On top of the thousands of non-publicly traded companies that went out of business during the lockdowns, the pandemic also hurt large companies like Gamestop and AMC and their stock prices fell as a result. But many of these hedge fund “experts” would drive the price down even further by going on TV and telling people to short it, thereby ensuring billions in profit from selling their positions for insane profits.

This was the rigged game that has paid for private jets of slime balls on Wall Street, whose job description entails betting (in a casino they own) that businesses will fail, and then ensuring their failure. Ah, but thanks to the free exchange of ideas on the internet, the jig is up and the world is learning about the sham that is the rigged system of hedge funds and their insidious relationship with government and media.

Right now, buying Gamestop and AMC has blown up in a meme; a meme that started on Reddit, in a group who focused on buying it, r/WallStreetBets. The post below, from this subreddit, explains the battle being waged on the internet right now that may forever change the future of Wall Street.

This is a big moment. A tug of war between tradition and the future.

Hedge fund managers live in the past, and continue to look down upon the retail investors. They truly believe that we, the average retail investors, don’t know anything about finances or the market (which may be true), and we’re just gambling our money away.

We don’t know any better. WE NEED HEDGE FUND MANAGERS TO TELL US WHAT TO DO! SAVE US!

This is the world they want to live in. This was the past.

Remember that scene from the Sopranos, where Tony’s wife calls to buy 5000 shares of Webonics, after she was manipulated emotionally to so? Institutions and hedge funds want us to be stuck in that world.

They’re scared of the future.

They’re scared because, so much information is available for free now. There’s no more fees for trading. We have large communities that discuss stocks and trading openly.

We can think and make decisions for ourselves, which scares the F*CK out of old school institutions and hedge funds.

Essentially, this group turned the rigged hedge fund game on its head by driving up the price of stocks on the short positions held by the hedge funds. This forced the hedge funds to have to sell their short options for a massive loss — billions of dollars — because they were trying to force the stock price down and memelords on Reddit drove it up.

This move gutted major hedge fund companies and enriched countless regular folks who participated in the meme. Some of the stories of the winners were heartwarming, allowing them to pay for medical procedures for family and vet bills for pets. 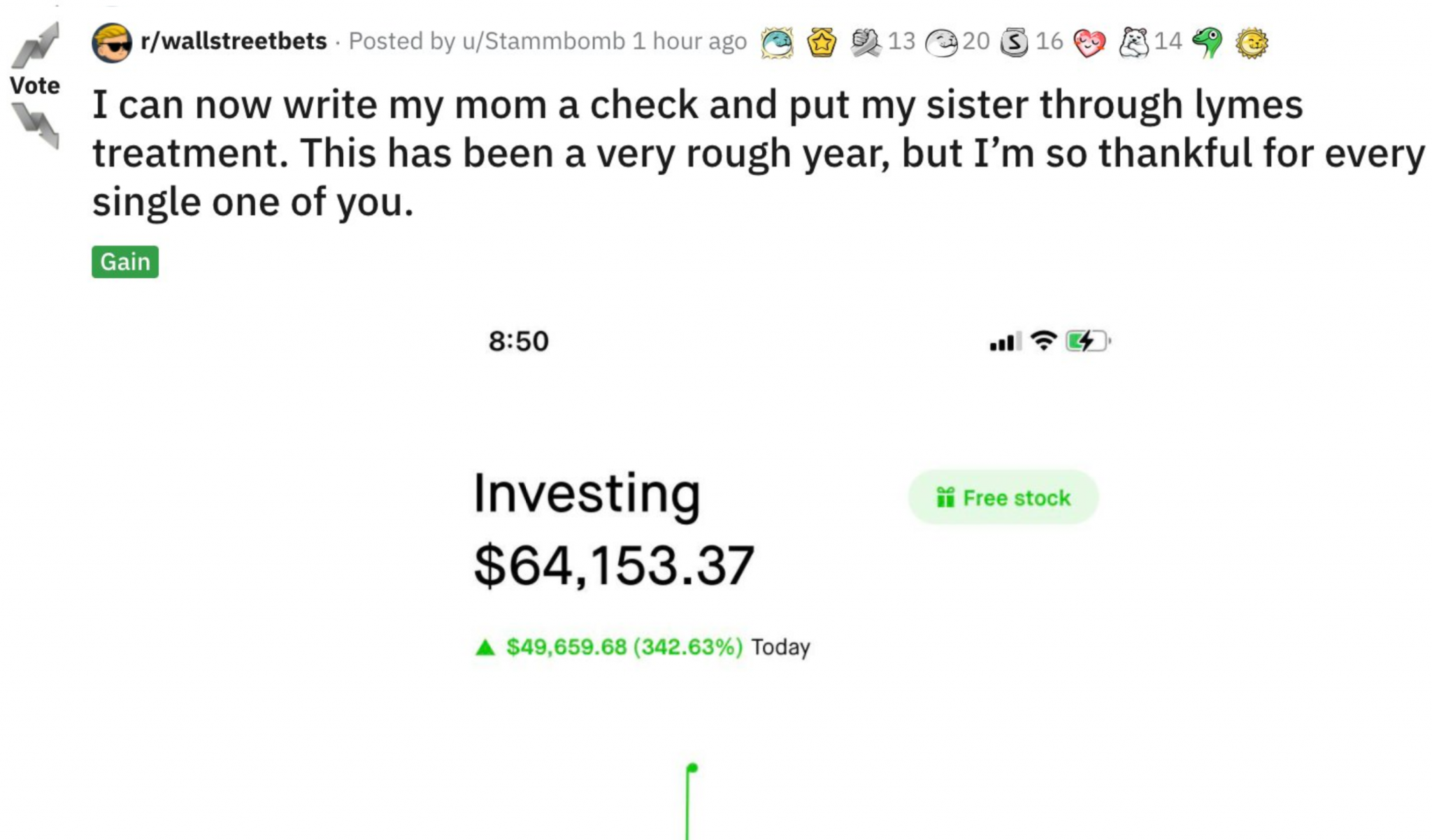 The effect of this coordinated effort is akin to Robinhood taking their money back from the rich as the memelords use the fixed system to attack the fixed system — and won. The Occupy Wall Street movement lasted months and in the end had very little effect on anything. The banks still get bailed out and hedge funds still profit from manipulating the market. January 26 and the days following have marked a turning point in this paradigm. It is the day the people beat the money changers at their own game.

Rest assured, however, that hedge funds losing billions of dollars to thousands of Redditors has the establishment on the offensive. Those who profited from this historical moment will be demonized in the mainstream as the hedge funds play victim. In fact, it has already begun.

Also, trading was suspended on multiple apps Thursday morning as the hedge funds assert their control back over the market.

In this war of Wall Street, the tone has changed from occupy Wall Street to liquidate Wall Street and this can be a very powerful statement. It is important to stay vigilant and also remember that you can lose whatever you invest.

Matt Agorist is an honorably discharged veteran of the USMC and former intelligence operator directly tasked by the NSA. This prior experience gives him unique insight into the world of government corruption and the American police state. Agorist has been an independent journalist for over a decade and has been featured on mainstream networks around the world. Agorist is also the Editor at Large at the Free Thought Project. Follow @MattAgorist on Twitter, Steemit, and now on Minds.

**This article (Memelords Just Figured Out How To Take Back The Billions Wall Street Made Profiting Off Lockdowns) was originally published at The Free Thought Project and is re-posted here with permission.**