A new renewable energy startup company has come up with a low-cost, zero-emissions solution to the thorny issue surrounding what happens when the sun isn’t shining and the wind isn’t blowing.

Paradoxically, the more the world embraces clean energy like solar and wind, the more it must embrace something markedly less-clean—diesel fuel or batteries.

In a building cut-off from a reliable grid powered by fossil fuel, diesel generators might be used to cover the hours of darkness when solar panels cease providing electricity. An alternative to this is to store the energy generated from the sun during the day in batteries, but along with representing a serious recycling problem, batteries require rare-earth minerals that are obtained from environmentally-destructive mining operations.

“Batteries are very expensive to store power for a 24 hour period,” says Jonas Eklind, CEO of Azelio, the Swedish energy startup that has potentially solved this problem for good. “If you want to store a lot of renewable energy, the most cost efficient way of storing this is thermal energy.”

In the always forward-thinking countries of Scandinavia, Azelio adapted an old Volvo assembly line factory to manufacture their patented, industry-first thermal energy storage system that will allow people to keep the energy that their standard PV solar panels generate during the day so they can use it in evenings.

And, instead of the critical energy storage component using rare and expensive minerals, the Azelio system uses recycled aluminum, which emits nothing, is much cheaper than lithium, and—as Jonas joked during an interview with GNN—“only lasts 62,000 years.”

Molten Aluminum can Save the Earth

The former CEO of a battery company, Jonas helped start this remarkable energy storage project in 2016 when he came onboard, around the same time Azelio was looking into thermal storage technology.

“When we started the project, we had a conversion unit that converts high temperatures into electricity,” he said. This device was called a Stirling Generator, and at first they would use biogas from landfills, water purification units—or from manure in a combustion engine to generate electricity—but after running numerous computer simulations on cost and energy capacity, determined that aluminum was the best choice.

Photons absorbed by solar panels on your roof enter into the system where an aluminum alloy is heated so it moves from a solid to a liquid. This allows for the storage of an incredibly dense amount of energy within the material which can be sent as heat into the Stirling Generator and turned into electricity on demand, with zero emissions and at a lower cost.

This is in direct contrast to fossil fuels, uranium rods or pellets, or diesel fuel, because the energy in the aluminum can constantly be melted and hardened again to produce or store energy. 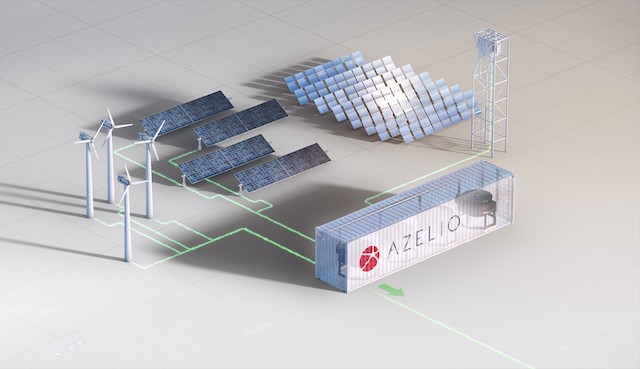 With its high energy density, the material has the ability to store energy for an extended period of time, while the aluminum suffers no degradation in capacity over time.

CHECK OUT: Working in Secret, Bill Gates-Backed Solar Company Reveals Tech That Could Spell the End of Fossil Fuels

The technology would prove to be ideal in parts of the world where grid reliability is low, like in Southern Africa where Jonas estimates that people only have access to a stable power grid 45% of the time.

Azelio’s thermal storage would allow for people to implement solar into a community, an industry, or just their homes, to defend against failing or unreliable grids, which Jonas says is becoming more and more normal even in the developed world. In his home country of Sweden, during the long winter, trees knock out power all the time, forcing rural communities to switch to diesel generators or similar interventions—sometimes for weeks.

WATCH: After 5 Years of Drought, Kenyan Region Finally Gets Clean Water Thanks to Solar-Powered Saltwater Plant

“Our system can give you decentralized power based on solar and wind so you can build a local micro-grid that provides you with almost everything you need 24 hours a day,” said Jonas.

And one of the really exceptional things about Azelio’s system is that, in theory, it’s as scalable as necessary; from 100 kilowatts per-hour, up to 100 megawatts per-hour, and more. Though it is maximized for solar power, it can easily work the same way for tidal or hydropower, biofuels, and wind.

Most city or town grids are split up into multiple components that feed off of, support, and borrow from one another to remain stable. Like normal solar power that utilizes energy from from the sun and sells the excess into the grid before later buying back from the grid at nighttime, Azelio’s thermal storage can fit into the baseload power of a modern established grid as much or as little as is required—whether that’s 10% of total power needs or 90%.

Azelio is conducting three verification tests this year—first, in their home country of Sweden, and two others in partnership with renewable energy companies. On March 5th, they inaugurated their thermal storage technology at the massive Noor solar power complex in Morocco, teaming up with Masen, and later this year, they will launch in Abu Dhabi with Masdar. In addition to these, Azelio has received various customer enquiries of a potential value in excess of 16 billion euro, including one customer in California who wants the system both for wind and solar energy.

“In 2025, with what we have promised to the market for the cost of electricity coming out of the system, we can possibly compete with large scale installations where we need to power a whole city.”