While Jerome Powell’s highly anticipated Jackson Hole speech was, in the words of Brean Capital’s Russ Certo “underwhelming and anti-climatic”, one couldn’t say the same for the shocking luncheon speech by Bank of England’s outgoing governor, Mark Carney, titled “The Growing Challenges for Monetary Policy in the current International Monetary and Financial System“, where he dedicated no less than 23 pages to a stunning – for a central banker – cause: to describe why the dollar’s  “destabilizing” reserve status role in the world economy has to end, and why central banks need to join together to create their own replacement reserve currency, one potentially tied to Facebook’s new “stablecoin” Libra, although in reality any “Synthetic Hegemonic Currency” as Carney defined it would do.

But first, a quick tangent: the reason we say Carney’s speech was shocking is not for what it proposes – after all, we have long argued that a world in which the dollar’s reserve currency status would be stripped away by the establishment and granted to some alternative – whether gold, or a basket of currencies like the IMF’s SDR, or a cryptocurrency like bitcoin – is coming in posts such as:

The argument behind all these articles is simple and two-fold: i) in a fiat world, one can only devalue relative to some other currency, yet we have now reached a point where (as Pimco suggested two years ago when it said the Fed should buy gold to devalue the dollar against it) every currency needs to devalue relative to some hard index outside of the monetary system (Carney’s point is that with a dollar as reserve currency anchor, it is becoming virtually impossible to lower its value even though it’s critical to do that), which means that ii) the unprecedented credit expansion that began when the last peg to gold was broken in 1971 when Nixon ended the Bretton Woods international system, has gone too far, and establishment powers are now seeking a reason to reimpose a hard monetary link: call it a “gold standard” or, more aptly, a “crypto (or stablecoin) standard“

Which brings us to why what Carney said, is shocking: because he not only validated what until recently the “serious experts” (i.e. the vapid, pro-establishment echo chamber with zero financial comprehension) would consider the deranged rambling of tinfoil blogs, but confirmed that – as a member of the establishment – what comes next will be catastrophic.

With that said, the gist of Carney’s speech was largely as expected: he argued that due to the dollar’s dominance of the global financial system, risks of a liquidity trap of ultra-low interest rates and weak growth are growing. In other words, after the US and dollar benefited for decades from being the world’s reserve currency, that status is now hurting not only the greenback and the US economy, but the rest of the world too.

“While the world economy is being reordered, the U.S. dollar remains as important as when Bretton Woods collapsed,” Carney said, even as emerging economies had increased their share of global activity to 60% from around 45% before the financial crisis a decade ago.

And yet, EM currencies did not see a comparable increase in importance, as the dollar was still used for at least half of international trade invoices – five times more than the United States’ share of world goods imports – fuelling demand for U.S. assets and exposing many countries to damaging spillovers from swings in the U.S. economy.

Commenting on possible replacements, Carney mentioned on possible fiat alternative: ” the most likely candidate for true reserve currency status, the Renminbi (RMB)”, which however “has a long way to go before it is ready to assume the mantle.” As such, “for the Renminbi to become a truly global currency, much more is required.  Moreover, history teaches that the transition to a new global reserve currency may not proceed smoothly.”

What he means here is that transitions in the currency reserve hegemon status usually take place during times of war:

Consider the rare example of the shift from sterling to the dollar in the early 20thCentury –a shift prompted by changes in trade and reinforced by developments in finance. The disruption wrought by the First World War allowed the US to expand its presence in markets previously dominated by European producers.  Trade that was priced in sterling switched to being priced in dollars; and demand for dollar-denominated assets followed.

In addition, the US became a net creditor, lending to other countries in dollar-denominated bonds.  Institutional change supported the role of the dollar, with the creation of the Federal Reserve System providing, for the first time, a market-maker and liquidity manager in US dollar acceptances.  This was particularly helpful for promoting the use of the dollar in trade credit, reinforcing its use as a means of payment and invoicing currency.

Not only do reserve status phase changes take place during times of war, the resulting turmoil leads to catastrophic financial consequences, to wit: “The resulting world with two competing providers of reserve currencies served to destabilize the international monetary system, and, some would argue, the lack of coordination between monetary policy makers during this time contributed to the global scarcity in liquidity and worsened the severity of the Great Depression.”

Incidentally, we have previously shown these reserve currency changes with the following chart which has since graced the pages of virtually every other financial publication and website. 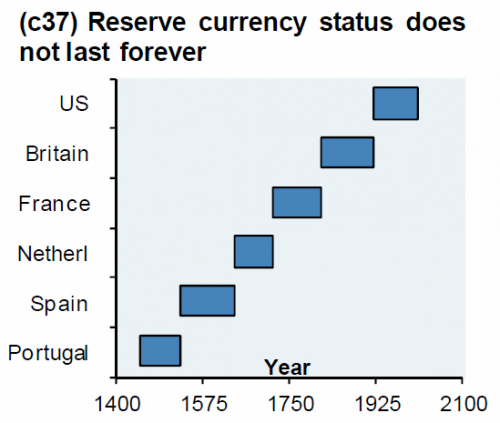 Another shocking aspect of Carney’s speech: the sense of urgency in his warning, and the extent of the social turmoil and chaos should policymakers ignore his warning. The BOE head went so far as to admit that very low equilibrium interest rates had in the past coincided with wars, financial crises and abrupt changes in the banking system. In short: we are on the verge of major socio-economic upheaval, and not because some ultra fringer blogger says so, but because one of the most respected central bankers in the world, a former Goldman partner to boot, is warning a financial apocalypse is coming.

As some suggestions to avoid this financial armageddon, Carney pitched what for years had been considered as merely yet another “conspiracy theory”: making the IMF’s SDR a reserve currency, specifically saying that as a first step to reorder the world’s financial system, countries could triple the resources of the IMF to $3 trillion as a better alternative to countries protecting themselves by racking up enormous piles of dollar-denominated debt.

“While such concerted efforts can improve the functioning of the current system, ultimately a multi-polar global economy requires a new IMFS (international monetary and financial system) to realize its full potential,” Carney said.

SDR aside, as noted above Carney noted that China’s yuan as the most likely candidate to become a reserve currency to match the dollar, but it still had a long way to go before it was ready. As a result, the best solution from a stability standpoint would be a diversified multi-polar financial system, something that could be provided by technology.

Enter Facebook, whose upstart “stablecoin” Libra was the most high-profile proposed digital currency to date according to Carney, but it faced a host of fundamental issues that it had yet to address. “As a consequence, it is an open question whether such a new Synthetic Hegemonic Currency (SHC) would be best provided by the public sector, perhaps through a network of central bank digital currencies,” the BOE head said.

Such a system could dampen the “domineering influence” of the U.S. dollar on global trade.

But that doesn’t fully answer the question why does Carney think that after nearly a century of betting as the world’s reserve currency, the dollar can’t be the global reserve any more. Conveniently, that is what CNBC’s Steve Liesman asked Mark Carney during an interview following his luncheon speech. This is what Carney said:

MARK CARNEY: The dollar is the global currency, we know that. The challenge is that the U.S. share of the global economy has been reducing. The dollar share of payments – not just financial assets but payments, a lot of payments of countries that have nothing to do with the U.S. make payments in dollars. And what happens in situations like we’re in tonight, where the U.S. to its credit is relatively strong, doing better. The fed has been doing the right thing. They have adjusted policy, they have tightened policy as it was strengthening. Now they’re making – they’re doing the right thing, but they adjusted and it is relatively strong. That means the rest of the world policy is tighter than it needs to be, and that feeds back on the U.S. economy in a way that ultimately slows this economy. And it leads to a substandard outcome. And in a world where you only have limited policy space, it is a dangerous place to be. So, the trade issues we’re talking about are reinforced by the structure of the monetary system….

STEVE LIESMAN: The bottom line is all of the pressure on the difference in growth around the world would not fall on the dollar exchange rate… It would be spread out if it was a global basket of currency is what you are saying.

MARK CARNEY: It would be spread out as a global basket of currencies. It is better for the system as a whole. It raises that equilibrium level of interest rates.

And just like that, the first shot across the bow of the dollar’s reserve status was fired by none other than one of the world’s most respected bankers. Which means that going forward pay especially close attention to how policymakers approach and interpret Trump’s chaotic, unconventional statements: once they begin to emphasize just how destabilizing for the dollar Trump’s unorthodox style is, that will be the beginning of the end for the dollar. That’s when gold and cryptos will go parabolic.

While Carney was not certain what would and should replace the dollar in this brave new world, he was adamant that doing nothing would lead to catastrophe:

“Even a passing acquaintance with monetary history suggests that this centre won’t hold.  We need to recognise the short, medium and long term challenges this system creates for the institutional frameworks and conduct of monetary policy across the world.  Given the experience of the past five years, I will close by adding urgency to Ben Bernanke’s challenge.  Let’s end the malign neglect of the IMFS and build a system worthy of the diverse, multipolar global economy that is emerging.”

In our first take of Carney’s suggestion, we said that was an “Unprecedented, Shocking Proposal.”  Without belaboring this point, we leave the final word to Alt-Market’s Brandon Smith who had some very apt parting words:

[T]he central banks, led by the BIS and IMF, know EXACTLY what they are doing.  I have been warning for years about the globalist plan to undermine the monetary stability of nation states and then replace the dollar itself with a new world reserve alternative for years.  Carney is not the first elitist to suggest this outcome.   Mohamed El Erian, Christine Lagarde, Putin and the Kremlin, not to mention the Chinese central bank have ALL suggested that a new one world currency is coming to replace the dollar.  Largarde even admitted that plans are in motion for a crypto-based global currency model.  I outlined this end game in multiple articles, a few of which can be read HERE, HERE, and HERE. Carney’s statement is not so shocking; it was actually quite predictable.

The closer we get to the global economic reset, the more central bankers are going to publicly push the idea of a cashless society and a one world currency system.

Everything the alternative media has warned about for years; all the outcomes other people have called “conspiracy theory”, will soon be treated as “common knowledge”…