Here’s a graph that doesn’t get shown in the mass media, and that I’m sure all those who want you to stay fearful of covid don’t want you to see. It shows the share of the tested population with antibodies to covid in Sweden week by week, beginning in the 28th week of 2020 (the first week for which the Swedish Public Health Authority provides data on the share of tests coming back positive). 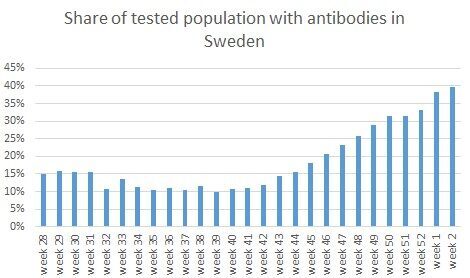 There is so much that is interesting about this graph. Like I said, it begins in week 28, in other words in early July, which is around the time the first Swedish covid wave was bottoming out. At the time, I personally thought this was due to enough of the population having developed immunity to covid, but we now know that was wrong. Rather, it was due to seasonality – in other words, summer caused covid to disappear.

The proportion testing positive for antibodies was 15% in early July. It remained stable for a few weeks, and then started to drop, as we would expect, given that the rate of new infections was very low at the time. Your body generally doesn’t keep producing antibodies forever after an infection, rather they wane. Of course, this doesn’t mean immunity is waning, as I discussed on this blog a while back. Although the actively antibody producing cells disappear, memory cells remain, ready to be activated at short notice if you get re-exposed to the pathogen.

After an initial reduction, the proportion with antibodies stabilized at around 10% in August, and stayed that way until October, when it started to rise, in line with the beginning of the second wave. And it’s literally kept rising by a percentage point or two, every week, all autumn and winter so far. In the second week of January 2021, 40% of those tested in Sweden had antibodies to covid.

Funnily enough, mainstream media has so far shown relatively little interest in publicizing this astounding fact. I’ve been getting most of my statistics from SVT, the Swedish public broadcaster. They had been providing data on the share with antibodies in Stockholm up to a month or two back, when that information discretely disappeared from their website. I wonder why.

I know some of you will respond that 40% doesn’t mean anything, because the data isn’t taken from a random sample. If all we had was one number, then that would be a valid point. But we don’t just have one number. We have the number for every week stretching back six months. Any bias due to people preferentially getting tested after a respiratory infection that applies now, when 40% are testing positive, also applied three months ago, when 10% were testing positive. The trend is real, and cannot be denied.

In the last few weeks the number of people being treated for covid in hospitals in Sweden has been dropping rapidly, as has the share of PCR-tests that are coming back positive. There is much discussion in the media about what the cause might be. Everyone seems to be very surprised. Is it because people are better at working from home? Or because people aren’t traveling as much? Or because more people are wearing face masks?

No-one is discussing the obvious explanation – that so many people have now had covid, and have developed immunity, that the virus is having difficulty finding new hosts. In other words, Sweden’s oddly controversial “herd immunity” strategy worked.

At the end of the second week of January, 10,323 people had died of/with covid in Sweden. In fact, the real number is probably much lower. A recent study carried out here in Stockholm found that only 17% of those who supposedly died of covid in care homes actually had covid as the primary cause of death.

But let’s assume 10,323 is correct, for the sake of argument. If 40% of Swedes have had covid, that gives an infection fatality rate of 0,25%. It’s a little higher than the global infection fatality rate determined by professor John Ioannidis, which is likely due to the fact that Sweden’s population is older than the global average. But it’s not much higher, and certainly not high enough to motivate the large scale harm imposed on us by the powers that be. That’s why the fear mongers don’t want you to see that graph. And that’s why I hope you will help me spread it far and wide.