Skip to content
ATOM: If our bodies were to be put under a powerful microscope, what would be seen would probably be a sea of sand grains in perpetual motion. (Photos.com)

Every action and all matter that has developed in the universe conforms to what we know as reality. The idea that our universe passes like a giant’s dream, or like a product of a very complex virtual reality program, more closely resembles an ingenious science fiction script than the crude and imperfect world in which we move every day.

However, the reality that we perceive seems to be contrary to scientific logic, if we bear in mind that matter hardly exists. The construction blocks of visible matter are atoms, which are merely small nuclei lost in the middle of a great spatial emptiness, surrounded by nearly invisible particles (electrons) that orbit them at magnificent speeds. If our bodies were to be put under a powerful microscope, what would be seen would probably be a sea of sand grains in perpetual motion.

According to recent research in the field of quantum physics, all of what we know as matter—the solid cement of what appears to be what our reality is composed of—could be nothing more than quantum fluctuations in the middle of the empty universe.

A group of physicists led by Dr. Stephen Durr from the John Von Neumann Institute in Germany confirmed that the sum of the three subatomic particles that make up protons and neutrons (called quarks) barely represent 1 percent of their total mass.

Such evidence suggests that the rest of the nuclear mass would be consist of gluons, ephemeral particles that bubble in the middle of the emptiness, which function to maintain the unity among the trio of quarks inside protons and neutrons. This fact suggests the hypothesis that our tangible reality might be mere fluctuations of emptiness or purely nothing.

The Other Truth
What we see with our physical eyes is greatly reduced to a convenient scope. Possessing a pair of eyes that could see only microscopic particles would make it impossible for us to move in a world with objects so large, as the objects with which we generally interact are composed of billions and billions of microscopic particles.

According to biologist Richard Dawkins, rocks only feel hard and impenetrable to our hands because they can’t penetrate each other. For us, it is useful to have notions of hardness and solidity as it helps us navigate our world.

Navigating in an illusory reality, we have to accept that somewhere in the universe another reality can be found. There could be a gigantic slumber, a crazy bubble, or God, if you will.

Since the reality of particles cannot be more than smoke and shadows, it could be that the real existence of all objects in the cosmos resides in one or more parallel spaces. Many scientists speculate that, just like a three-dimensional object can project a two-dimensional shadow over the ground, a multidimensional universe (like the case of the String Theory) could cast a shadow in three-dimensional space.

If this theory is correct, every object and organism in this world would not be more than a gross representation of objects and organisms in a more “real” universe. Coinciding with this theory, the existence of an extracorporeal mind in another dimension might be the ideal explanation for why we have memory, as the atoms in our brains are replaced hundreds of time throughout the course of our lives. According to Steve Grand, author of “Creation: Life and How to Make It,” none of the atoms that make up our bodies today would have been in our bodies during an event in our childhood that we remember.

Grand suggests that matter moves from one place to another and reunites momentarily so that you can be you. Therefore, you aren’t the matter of which you are made. This would imply that our real bodies are in the space that we cannot comprehend—while a virtual body, a mere container, would be what is in what we call reality. 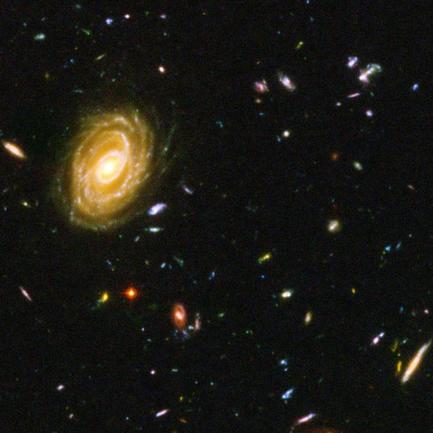 A view of the visible universe as seen in a Hubble Telescope composite photograph.   Is our universe just a hologram? (NASA/Getty Images)
“To them, I say, the truth would be nothing more than shadows of the imagination.”          –  Plato, from “The Republic”
Shadows and colours of light are crude projections of a “more real” reality. The universe that we live in presents itself as something even more illusory, where bodies, minds, and planets are parts of a great magic trick without a magician or an audience.

Scientists in Hanover, Germany, working on the GEO 600, which is an instrument that detects gravitational waves, believe they have discovered a “granulation” in space-time that indicates that our universe is nothing more than a giant hologram.

Those responsible for the GEO 600 believe that, in the same way a digital image loses resolution with significant increase in its size, the captured interference in the detector could be interpreted as the universe’s limited resolution of what it’s capable of providing to human eyes. There’s an exact point where the hologram of reality begins to “pixelize” itself.

The scientists suspect that the precision of the GEO 600, capable of detecting variations in longitudinal waves at the subatomic scale, served to discover the tiniest grains that compose the three-dimensional holographic universe, projected from the bi-dimensional confines of its interior.

You and I, Only Holograms
The idea of a holographic universe isn’t new. In the 1990s, scientists Leonard Susskind and Gerard Hooft suggested that the same principle that makes a two-dimensional image on a flat surface look three-dimensional could be applied to the entire universe.

Then, why do our senses perceive reality in such a distinct and “voluminous” way if we appear to be no more than shadows on a flat screen? The problem could be that our human eyes and our powerful telescope lenses conform to the reality of such a hologram of the rest of the universe.

The second point to consider is that our organic brain can also be found in the illusion, never being able to interpret a universe with a greater or fewer number of dimensions than can be perceived.

Neurophysiologist Karl Pribram, founder of the Centre of Cerebral Research at the University of Radford in Virginia, thinks that our brains are holograms interpreting the hologram universe, mathematically constructing a reality interpreting frequencies that come from another dimension—a domain of significant reality that transcends time and space.

Nevertheless, the theory of a holographic universe of only two special dimensions conflicts with multidimensional theories arising from the roots of the superchord theory. Before this mark of a disparate hypothesis, many scientists already suspected that the universe is a hologram or illusion created by particles in the emptiness. However, all of the scientific efforts to comprehend the truth amid the mirage have become trapped in a frustrating array of unprovable theories.

Many vanguard theorists think that the disturbing breach in the field of quantum physics and relativity could explain historically argued phenomena in the scientific field, like those in which the mind doesn’t seem to be associated to the brain—such as near-death experiences, remote vision, and precognition.

In whatever case, Plato’s allegory of the cave would seem to be the most rational option now for explaining these vivid daily experiences that our brains interpret as being real appearances of the world.

The Allegory of the Cave – Plato

Plato gives his answer at line (515b2). The text here has puzzled many editors, and it has been frequently amended. The translation in Grube/Reeve gets the point correctly:

“And if they could talk to one another, don’t you think they’d suppose that the names they used applied to the things they see passing before them?”

Plato’s point is that the prisoners would be mistaken. For they would be taking the terms in their language to refer to the shadows that pass before their eyes, rather than (as is correct, in Plato’s view) to the real things that cast the shadows.

If a prisoner says “That’s a book” he thinks that the word “book” refers to the very thing he is looking at. But he would be wrong. He’s only looking at a shadow. The real referent of the word “book” he cannot see. To see it, he would have to turn his head around.

Likewise, we may acquire concepts by our perceptual experience of physical objects. But we would be mistaken if we thought that the concepts that we grasp were on the same level as the things we perceive.