Propaganda went primetime last night in a desperate and panicked response to 2000 Mules by patriot friend Dinesh Dsouza and Truth About Jan-6 film narrated by POW Jake Lang still inside the DC gulag. 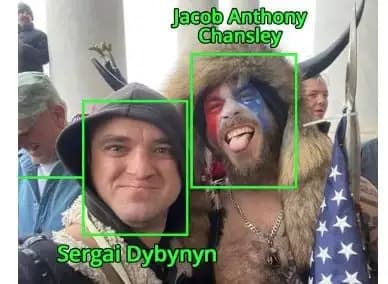 According to the court transcript, 36-year-old Henry “Enrique” Tarrio, from Miami, began working with the FBI after being arrested on federal fraud charges related to a scheme to sell stolen diabetic test strips well below market value. In 2021!

At a 2014 court hearing, a prosecutor arguing for a reduced sentence for Tarrio told the judge Tarrio “was the one who wanted to talk to law enforcement, wanted to clear his name, wanted to straighten this out so that he could move on with his life.”

But they’ve got even more significant problems. Why was Ukraine neo-Nazi Sergei Dybynyn in the U.S. Capitol on 6 January 2021 and photographed standing next to the horned Viking (an actor by the name of Jake Angeli AKA Jacob Anthony Chansley?

The House Committee is ignoring it because they know that if they follow the money–i.e., who paid for his plane ticket and lodging in Washington, DC –they’ll find Democrat operatives (Crowdstrike, Sussman, etc.) holding the checkbook!

But it gets even worse.

Maybe there was a Ukraine Nazi on January 6 because the US Department of Defense just disclosed for the first time the exact number of facilities its government has supported in Ukraine in a document titled ‘Fact Sheet on WMD Threat Reduction Efforts.’

According to Pentagon data, the US has “worked collaboratively to improve Ukraine’s biological safety, security, and disease surveillance for both human and animal health, “Supporting “46 peaceful Ukrainian laboratories, health facilities, and disease diagnostic sites over the last two decades.”They have been focused on “improving public health and agricultural safety measures at the nexus of nonproliferation.”

These Biolabs were instrumental in the development of new technologies. “often” Developed in collaboration with organizations like the World Health Organization and World Organization for Animal Health. “consistent with international best practices and norms in publishing research results, partnering with international colleagues, and multilateral organizations, and widely distributing their research and public health findings,” But the Pentagon insisted.