Skip to content
New York Times front page features images of 65 children killed in the recent attack on Gaza. almost all are Palestinian.

We need to acknowledge what an extraordinary moment this is. Mainstream media are finally focused on Israeli attacks on Palestinian children.

The New York Times did the unprecedented, and devoted a huge portion of its front page to the images of 65 children, almost all of them Palestinian, killed during the recent onslaught. The accompanying report is almost impossible to look at, it is the face of innocence, beauty, hope, all defiled. Notes the Times:

Nearly all of the children killed were Palestinian.

In all 69 children were killed, two of them Israelis. Nothing like this took place in 2014 when Israel killed 526 children. While in 2018, the New York Times ran four columnists’ justifications of Israel’s slaughter of over 200 unarmed protesters on the Gaza border, as well as the maiming of thousands more.

And notice the angry/unhinged response from Abe Foxman. The news is antisemitic; publishing such pictures is a “blood libel.”

Also significant in the changing optics of the conflict in the United States was this stirring NBC Nightly News report by Andrea Mitchell from Sheikh Jarrah in occupied East Jerusalem two nights ago. The veteran international correspondent’s report was an insistent call on Secretary of State Antony Blinken to stop the evictions of Palestinians. It featured Dr. Ahmad Tibi, the Palestinian member of Knesset, telling Blinken to “intervene”- yes, Ahmad Tibi on NBC Nightly News.Mitchell:

Protests today in East Jerusalem where 700 more Palestinians are fighting evictions to make room for Jewish settlers. The first question I got when I got here is, What did Blinken say? What did Blinken say? They wanted to know, what did the U.S. Secretary of State say about the threat that they are going to be evicted from their homes?

Today they have new hope after Blinken said Israel should stop demolishing their homes.

The best part of the report was when Mitchell observed the brutal arrest of a child and said so:

We don’t know how this started, but we saw a 15 year old boy getting beaten and carried off by police. People say, ‘Leave him, he is a child, he is a child!'” 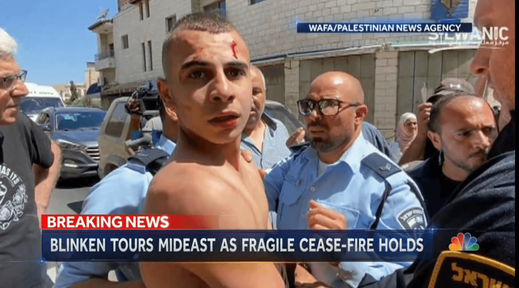 We can only hope that this emphasis will continue in the U.S. press, including a look at some of the 100s of thousands of young people in Gaza denied any hope of fulfilling their dreams.

Israel lobbyists are seeing what we are seeing and they’re panicked. CAMERA points to a string of pro-Palestinian op-eds in the New York Times op-ed page- “balanced” today by a religious Zionist offering from Rabbi David Wolpe about how Jews have been in that land since biblical days.

That string includes Diana Buttu’s fine piece on the “nakba, the ethnic cleaning of Palestine,” that details the destruction of her father’s village of Mujaydil and the creation on its lands of a Jewish-only town called Migdal Haemek.

That piece was accompanied by this excellent graphic on the loss of land under assigned Palestinian control since 1948. The graphic is similar to one featured in Palestinian solidarity postcards and posters. 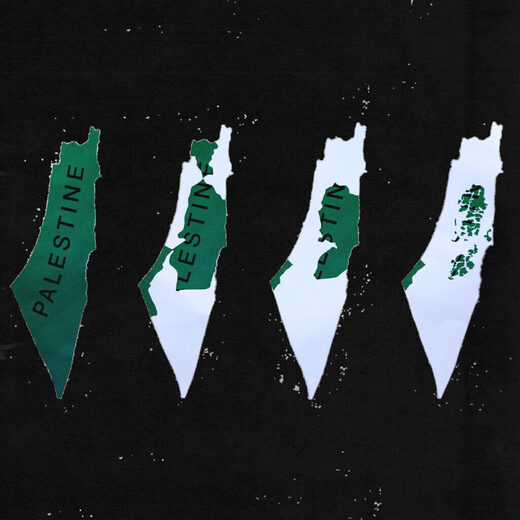 The Times response to the criticism is laughable, saying that the image is an “artwork’ that is not meant to convey historical information! 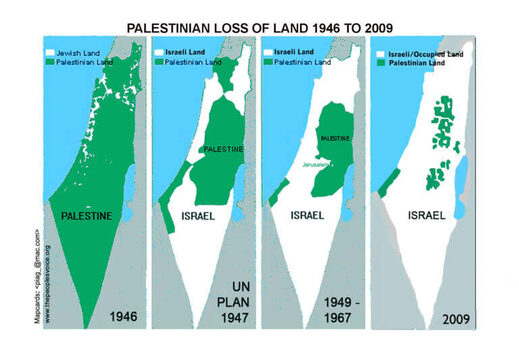 P.S. Weiss notes: In 2014, Brooke Gladstone hosted me on the NPR show “On the Media” to talk about the 526 Palestinian children then being killed in Gaza. Gladstone got a lot of pushback from pro-Israel folks at the time; which may explain why “On the Media” hasn’t touched the issue since, that I’m aware of. (Please tell me I’m wrong Brooke).