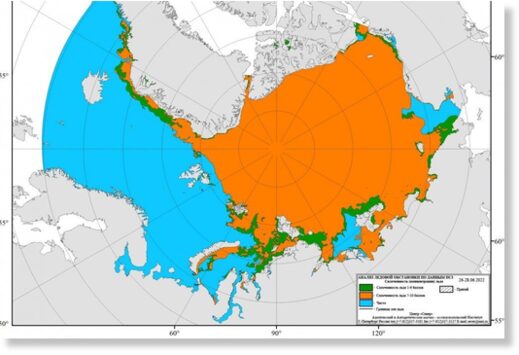 The mainstream are heat-chasers. They report only on stories that fit the AGW Party agenda. This cherry-picking leads to a painfully misinformed public when it comes to the climate – which is exactly where they want us.

A case in point today: we have the Arctic and Greenland refusing to play ball.

Earth’s most-northern reaches are actually experiencing persistent and long-lasting COOLING, which is far more telling than a brief burst of heat in, for example, Western Europe, which, 1) is forecast to be over before it’s even really begun, and 2) can be tied to entirely natural forcings – namely low solar activity and a violently ‘buckling’ jet stream flow (more on that below).

The mainstream’s silence re. the Arctic this year is deafening. Why is it that ice loss is newsworthy yet substantial GAINS are deemed irrelevant? What we see from the likes of the BBC and CNN isn’t a honest account of worldly events, it’s selective programming.

These corporate-backed agencies never question vaccine safety issues, either, let alone efficacy — and it’s the same thing: their masters, those financial backers on high, are paying for the delivery of a narrative; and although the truth is forever circling the peripheral of said agenda, these backers have the wealth and influence to prevent it from ever infiltrating — truth is treated like a nuisance, like a swarm of flies that need swatting, constantly, forever – ‘firehosing’ – and they’re very good at it.

The Svaytoy Petr set sail from the far eastern Russian port of Petropavlovsk on June 23, on course for Arctic waters. Two weeks later, the oil tanker had reached the Bering Strait, but it encountered an issue — unusually thick summer ice.

The ship, built in 1992, with only limited ice-protection, called for assistance to break through an ice sheet that, even in mid-July, still covers major parts of the Arctic shipping route.

Help was quickly dispatched, and on July 12 nuclear-powered icebreaker Sibir busted its way through the East Siberian Sea and met the Svaytoy Petr.

On Sibir‘s tail was another old oil tanker, Ice Eagle, on its way from Murmansk to Pevek.

These two aging oil tankers are among the first ships to tackle the Northern Sea Route this year.

So far, only LNG carrier Nikolai Yevgenov has managed to transit the route. The natural gas carrier sailed eastwards towards Asian markets in mid-June; and while It managed to traverse most of the route independently, the powerful vessel still required an icebreaker escort on some particularly thick stretches.

As reported by thebarentsobserver.com, it is mid-summer, but major parts of the waters that connect the eastern Bering Strait with the Barents Sea remain covered by sea-ice.

Ice maps from Russian meteorological service Roshydromet (shown below) reveal that ice layers in late June were most comprehensive in the area of the Vilkitsky Strait, the New Siberian Islands and in the Chukchi Sea. 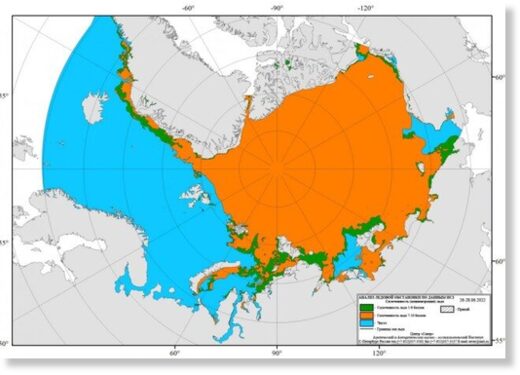 Sea-ice in the Arctic in late June 2022. Map by Russian Arctic and Antarctic Research Institute

Russia’s Arctic shipping ambitions have been increasing, in part spurred by the sever sanctions imposed on it.

However, and as revealed above, stubbornly thick Arctic sea ice has proved an issue this year.

Looking at NASA’s Seasonal Cycle of Northern Hemisphere Sea Ice chart, which extends back to 2011, this summer has seen Arctic sea ice area fire above all previous years: 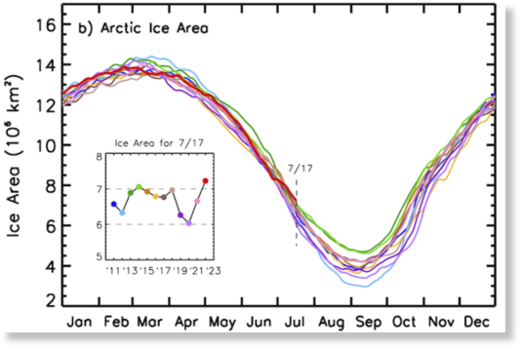 Moving on to the NSIDC’s chart, it shows that Arctic sea ice extent is sitting at its highest level since 2008: 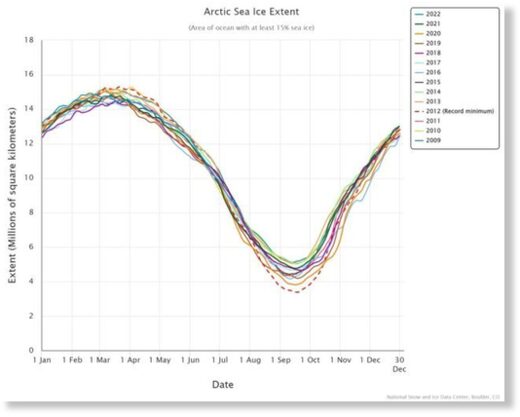 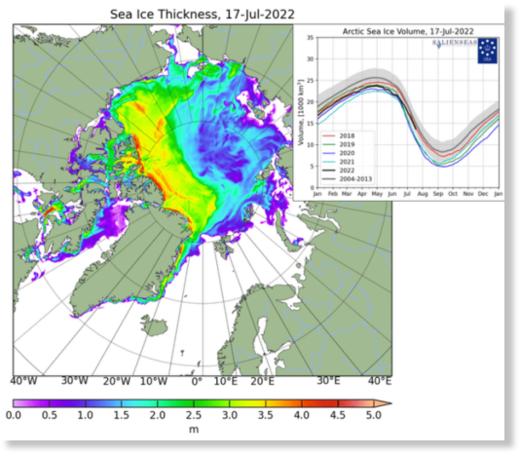 And while we’re up north, let’s also take a look at Greenland — the poster child for anthropogenic global warming.

Unfortunately for the AGW Party, and the reason you’re hearing nothing about Greenland in the press either, is because the ice sheet is refusing to melt as scheduled, even as we approach the height of summer. 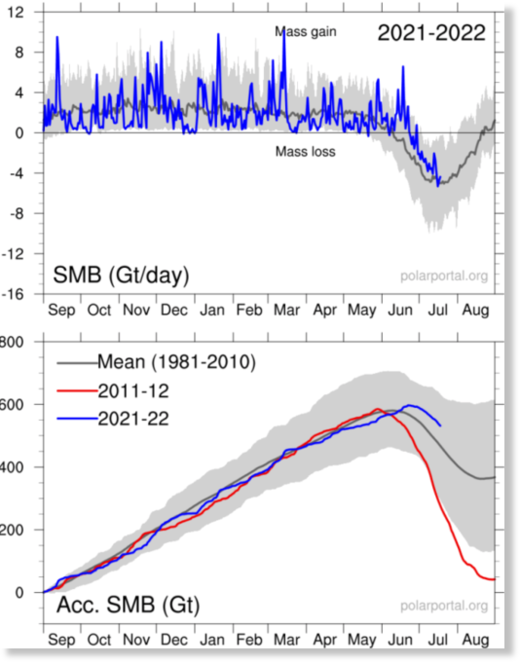 More on that here.

COLDEST JULY AIRMASS IN 70 YEARS BLOWS THROUGH THE BERING STRAIT

“These kinds of things spin around the higher latitudes all year long,” said Rick Thoman, Alaska climate specialist at the International Arctic Research Center at UAF. “Usually, this cold would stay farther north. If this was happening on the North Slope, it would be chilly but nothing particularly to write home about. The fact that it’s moved so far south is really the news here.”

Flicking through the climate records, Thoman notes that this is coldest July airmass of the past 70 years.

“I would chalk this particular storm up to one of those random variabilities that are going to happen from time to time, even in a warming climate,” added Thoman – which serves as another example of a so-called expert being led by a narrative rather than the data in front of them.

The low-pressure area saw the wind at the Nome Airport reached 48 mph on Monday. Such a speed might be expected for a November storm, but gusts of that force have not been seen in the month of July since such records began in the mid-1980s.

Just as obscure, summer snow has fallen on the Diomede islands, Ear Mountain near Shishmaref and the mountains near Dexter and Banner Creek, too. Thoman said he would not be surprised if downtown Nome saw snow overnight Monday, which he said would be an unprecedented event after failing to find documented July snow in Nome’s entire climate record, which stretches back more than a century.

Thoman closed with a note on wildfires, which he said are likely to be over in Alaska now, given the early onset of Fall.

“The Nome area could see smoke aloft from fires in Siberia … [but] it’s been comparatively quiet over central Siberia as far as wildfires this summer” – which, again, is why media mentions of this region are lacking.

Yet the gullible masses continue to fall for it.

However, when the penny finally does drop, which it inevitably will, the mass disillusion and confusion that will follow as the framework that so many have had their reality built upon crumbles before their eyes will shake the foundations of our modern civilization.

Picture the distrust and chaos that will ensue as decades of damaging lies are exposed.

Many of us are already there, of course, but imagine the scene when the remaining 80-90% cotton on. It will bring carnage and destruction, it will see a level of anger rarely witnessed throughout human history.

Moreover, that anger will be directed at the right place, too: at ‘the system’.

This our best hope of defeating the elites.

Their day of reckoning is approaching, and they know it.

They are preparing for war.

And so should we.