Skip to content
Over a decade ago we were mocked and ridiculed for saying that the Fed was manipulating and rigging stock markets, pushing risk assets higher (either singlehandedly or via Citadel) and its only mandate was to prop up consumer confidence by preventing a stock market crash when instead all it was doing was creating a record wealth and income divide which has now morphed into “Trump”, populism the likes of which have not been seen since WWII, the BLM movement, and a country so torn apart it is unlikely it can ever be put back together again.

Fast forward to today when things are very different, and everyone from SocGen, to Rabobank, to Bank of America trashes the joke that is the Fed, and whose devastating money-printing fetish – just to keep stocks elevated – has become so conventionally accepted that the only ones who can’t see it are either idiots or those whose paycheck depends on not seeing it.

We can now add JPMorgan to the list of those who do see what was obvious to everyone back in 2009.

In an interview with Bloomberg TV, Oksana Aronov, head of alternative fixed-income strategy tat JPMorgan Asset Management, said that central bank buying has forced rising credit valuations out of line with deteriorating fundamentals, resulting in a market where everything is broken:

European and U.S. credit investors are “locked in this collective hallucination with the central banks around valuations and what they mean and that there is a lack of desire to acknowledge the fact that market valuations are entirely fabricated – or synthetically generated – by all the central bank liquidity and do not reflect fundamentals of the securities that they represent,” Aronov said in a Friday BTV interview, adding that “Central banks continue to run the show and investors need to be really cautious here.”

And while it is meaningless to try and impute logic or reason to what is clearly a broken, manipulated and centrally-planned market – in fact, one could argue that this manmade “market” is one giant Constanza farce in which whatever does not make sense will continue to work until everything finally collapses – Aronov has several recommendations including:

Why? Because “we’re going into a much more difficult second half” with the fiscal cliff coming in just two weeks, where a trapdoor may open below the economy and lead to another crash. 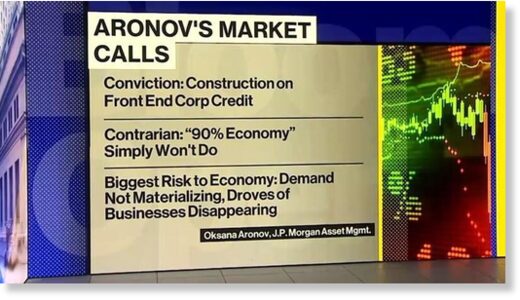 Aronov also pours cold water on all the “but a vaccine is coming” cheerleaders, saying that

“even if we have a vaccine arrive some time at the end of this year or beginning of next year we will still realize that the damage has been done and particularly small business that’s been without revenue for months and was forced to close, is not going to be able to reopen simply because a vaccine is here now. So the news on the ground will continue to feel pretty dire.”

Meanwhile, while nobody is paying attention, downgrades and defaults are piling up, there’s a record level of fallen angels which isn’t reflected in credit valuations, and the fundamentals are simply getting worse by the day.

Oksana’s ominous conclusion: “Ultimately fundamentals will prevail” which is extremely frightening when one considers that everything is so overvalued that once fundamentals indeed do prevail, the Great Depression will be a mere walk in the park compared to the coming crash.

Her advice to those who nonetheless want to put their money into something: “Investors should look to the things that make sense fundamentally before investing.” Things such as gold, because once fundamentals prevail the current monetary system will no longer exist.

Aronov’s full interview is below