Is the Fed lying to us? ‘When it becomes serious, you have to lie’ 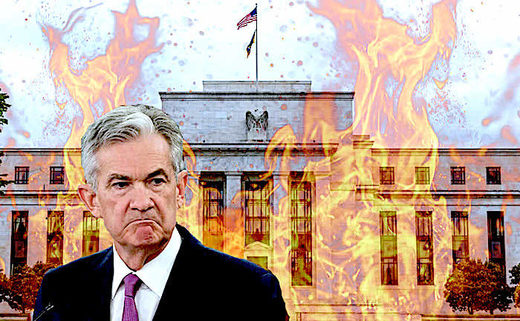 The recent statements from the Federal Reserve and the other major world central banks (the ECB, BoJ, BoE and PBoC) are alarming because their actions are completely out of alignment with what they’re telling us. Their words seek to soothe us that “everything’s fine” and the global economy is doing quite well. But their behavior reflects a desperate anxiety.

Case in point: On October 4, Federal Reserve Chairman Jerome Powell publicly claimed the US economy is “in a good place”. Yet somehow, despite the US banking system already having approximately $1.5 trillion in reserves, the Fed is suddenly pumping in an additional $60 billion per month to keep things propped up.

Do drastic, urgent measures like this reflect an economy that’s “in a good place”?

The Fed’s Rescue Was Never Real

Remember, after a full decade of providing “emergency stimulus measures” the US Federal Reserve stopped its quantitative easing program (aka, printing money) a few years back.

But that cessation was meaningless. Because the European Central Bank (ECB) stepped right in to take over the Fed’s stimulus baton and started aggressively growing its own balance sheet — keeping the global pool of new money growing.

Let’s look at the data. First, we see here how the Fed indeed stopped growing its balance sheet in 2014: 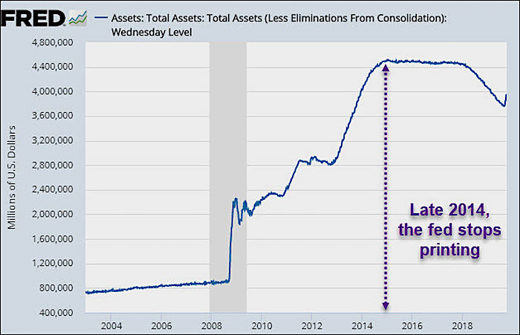 And we can note other important insights in this chart.

For starters, you can clearly see how in 2008, the Fed printed up more money in just a few weeks than it had in the nearly 100 years of operations prior.

The flat parts of the curve in this chart are where the Fed paused its printing efforts. And at each of these plateaus, without the tailwind of fresh new hundreds of $billions created from thin air, the equity markets stopped rising and even (gasp!) threatened to decline.

So what did the Fed do in response? It resumed the money printing.

The above chart is really a monument to failure. The initial $trillions of printed money didn’t solve things, and so more printed $trillions followed.

Every trick in the book has been used. QE. Operation Twist. Jawboning by Bernanke, Yellen and now Powell. More jawboning and tweets from the President and his administration. And now, fresh interest rate cuts and a resumption of QE (but don’t call it that!) by the Fed.

Collectively, these efforts have horsewhipped stocks and bonds higher and higher over the past decade — which was the intent. But it seems the higher they go (and thus further distorted from their underlying valuation fundamentals), the Fed becomes ever more frightened of a correction.

So now let’s look at what happened after the Fed passed along the money printing baton to the ECB.

We can clearly see in the chart below that when the Fed stopped its printing in 2014, the ECB stepped right in and carried things on until this year: During the years of ECB printing (and printing by other world central banks) stocks and bonds continued powering higher. That is, until the ECB slowed its efforts in late 2018, as the Federal Reserve was raising its federal funds rate.

You see, 2019 was supposed to be the year when the major central banks were supposed to start unwinding their massive balance sheets in earnest. And, in doing so, start to undo the massive market distortions caused by their prior actions.

And what happened in late 2018? The markets started rolling over fast and hard.

Panicked, the central banks have rushed back to “rescue” the system. And in the process, are showing that they’ll likely never “unwind” the $trillions they’ve been printing from thin air. 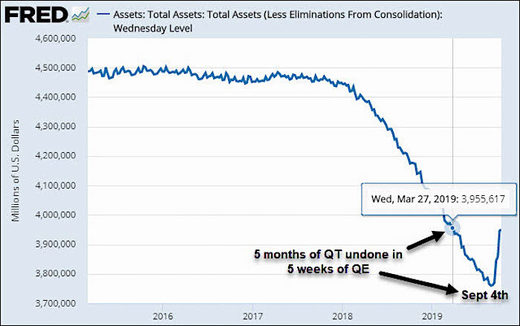 We see that, starting in 2017, the Fed began the slow process of trying to remove some of the liquidity it has injected into the system over the past decade.

It didn’t get very far.

Worried about recessionary signs and wobbly stocks (still within a few percentages of their all-time highs, mind you), the Fed’s most recent actions have undone 5 months of ‘tightening’ in just five blistering weeks of panic.

It’s enormously concerning that the stock market is now the sole focus of central banking. The stock market is a terrifically poor instrument by which to try and guide anything (except the growth in apparent wealth of the ultra-rich – it’s very good at that).

Remember, the Fed stopped printing and began raising rates in order to build up some wiggle room to deal with the next recession when it inevitably arrives.

But that never came to pass.

The last rate hike was in January and the Fed is now back to lowering rates. With the federal funds rate at a measly 2.0% today and likely headed lower from here, the Fed has practically no wiggle room to speak of at this point: 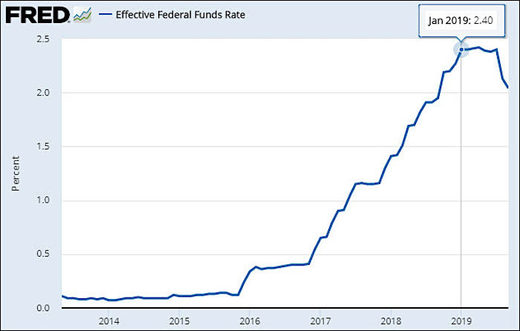 “When it becomes serious, you have to lie”

The above is a quote from Claude Junker, of the EU technocracy, explaining (in 2014) why he believed lying is necessary during financial emergencies.

Fast forward to last week. When Jerome Powell tried to explain why the Fed is suddenly back in the business of printing $60 billion per month (out of thin air) to buy more US Treasury bills, he came off sounding like he’d ripped a page out of Junker’s playbook.

Is he now lying because “It’s serious”?

“I want to emphasize that growth of our balance sheet for reserve management purposes should in no way be confused with the large-scale asset purchase programs that we deployed after the financial crisis,” he said. “Neither the recent technical issues nor the purchases of Treasury bills we are contemplating to resolve them should materially affect the stance of monetary policy.”

“In no sense, is this QE,” Powell said in a moderated discussion after delivering his speech.

Well, what about the fact that the Fed is conjuring $60 billion of new money into existence each month and shoving that into the banking system?

And what about the fact that these new Quantities of money are Easing financial conditions and expanding the Fed’s balance sheet again?

You mean other than those similarities, it’s definitely not QE, Jerome?

Even Wall Street agrees with me:

“I think what the Fed Chairman decides to call it is inconsequential,” Yousef Abbasi, global market strategist for U.S. institutional equities at INTL FCStone told MarketWatch. “From what’s been discussed, it’s exactly what was once called QE. They would be buying securities and increasing liquidity and that is easing. However you want to refer to it, ultimately it’s supportive of equities,” he said.

Mike O’Rourke, chief market strategist at Jones Trading said in an interview that balance-sheet expansion may be different because it will involve the purchasing of short-term government debt rather than long-term debt, but that the effect is to enable private banks to maintain larger balance sheets and take on more risk. “This is very QE-like,” he said.

Further, it has to be noted that the decision to suddenly restart the QE program was made mid-cycle, that is between FOMC meetings. This is a good indicator that things are “serious”, as the Fed typically doesn’t like to appear as if it’s been caught off-guard.

So, from my perch: something BIG and concerning is afoot in the economy, the Fed is secretly panicking, and they’re lying to us about it.

Here in late 2019, both the Federal Reserve and the ECB are now both easing again – or back to ‘fraudulent money printing’ as I prefer to label it.

Perhaps a definition is in order. A fraud is meant to deceive while removing something of value from one or more parties.

When printing money, the central banks say they are doing it to protect the economy, jobs and the financial system. But what’s actually happening is that wealth is flowing like a raging river towards a select few individuals and corporations.

It’s critical to understand that the central banks cannot print up prosperity. All they can do, being redistributive organizations, is take purchasing power away from one side and hand it to another.

So the key question to be asking now is: Who’s winning and who’s losing?

Well, here in the US, we already know that it’s the tippy-top 0.1% that is doing almost all of the ‘winning.’ The next 0.9% are doing pretty well, too. But by the time we get just slightly below the top 10%, we run out of “winners”. 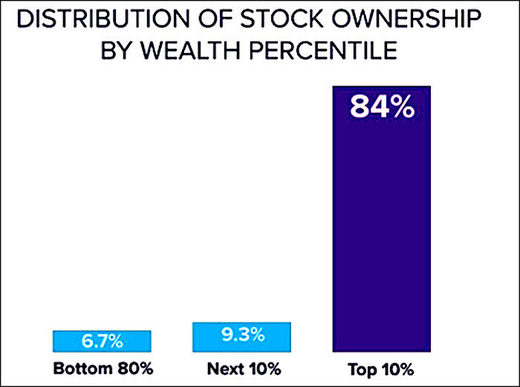 This enrages me enormously. It’s such an obvious scam to reveal, but somehow the US press is entirely NOT up to the task.

For some insane reason, it has become normalized for the ultra-wealthy to grab everything for themselves, leaving little left over for today’s lower classes or for future generations. When did such magnificent greed become normal? How is any of this okay with anybody?

Increasingly, we’re seeing that more and more people are NOT OK with that. The Yellow Vest protests in France, the uprisings in Ecuador and Hong Kong, the climate protests, the Extinction Rebellion movement — all of these are forms of rejection of destructive blind greed.

They are also predictive signs that our social and political systems are becoming badly stressed. When people finally start losing hope, they turn on their “leadership” and revolt.

By now the central banks should have realized that their efforts to perpetually boost asset prices are unraveling the main social contracts upon which our very social stability and relative political peace rest.

But if they have, they aren’t demonstrating any signs of it. Instead, they’re still pretending everything is “in a good place.”

The core predicament facing the Fed and its central banking brethren is that reality can be delayed but not dismissed. The pressures of instability continue to mount exponentially the more the central planners try to contain and (literally) paper over them.

It’s no longer an issue of keeping stock prices attractively high. It’s about accelerating social inequality, the rejection of capitalism and globalization, rising geopolitical divisions, resource scarcity, and the loss of liberty, health and happiness. The central planners’ extractive policies are now manifesting in all of these ills.

How much longer can they keep the system from exploding outside their control?

In Part 2: Why The Fed Will Fail, we look closely at the key economic indicators that are convincing us that there’s not much time left before things violently correct.

At tipping points like now, it’s critical to remember that cycle ends are processes (i.e. slow), but reversals are events. They happen fast.

And once they start, only those who have already prepared in advance are ready for what comes next.