When people are confronted with the idea of “mind control” they often think of something out of television or film media; a lone prisoner tortured, chemically dazed and conditioned into a hollow zombie as his captors squeeze information from him or use him to complete a task he would not normally do or morally accept. And while there is actually some truth to this kind of Hollywood depiction, as is evidenced in the exposure of government programs like MK Ultra, the most insidious forms of mind control are far more subtle. 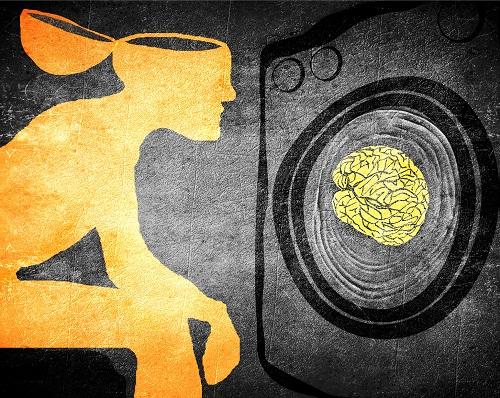 Governments and the elitists behind them do not necessarily need to physically cage, drug and brutalize people in order to influence how they behave. All they need to do is manage their perceptions, expectation and assumptions. This can be accomplished with large portions of the public, rather than one person at a time.

The elites have always been fascinated with the idea of mass hypnotism. In the 18th century Franz Mesmer was famous for entertaining European royalty with displays of what he called “animal magnetism”, which included what we now know as hypnosis of individuals and groups. Mesmerism has since become synonymous with the attempt to befuddle people and dictate their actions while in a kind of trance. Hypnotism is still a very active subject in psychiatric circles and the US government took avid interest in hypnotism as a weapon during their MK Ultra experiments in the 1950’s.

People involved in the field of hypnotism are quick to point out that a hypnotized person cannot be made to do something that goes against their code of ethics, but this is not exactly the whole story. A hypnotist makes suggestions that the subject chooses to follow (or refuses to follow) while in a trance state, however, what if they can be convinced (or fooled) through hypnosis into believing that a particular action is in their best interest in spite of their moral code or sense of self preservation?

This type of control over a subject can and has been accomplished in hypnotic therapy, and examples of “covert” hypnotherapy are also on record, including the example of an Ohio divorce attorney that used covert hypnotism against multiple female clients and is suspected of using it against some court employees to disarm their psyches and then rape them without memory of the incident.

About two thirds of any given population are capable of being hypnotized to varying degrees. Stanford University has been avidly searching for a brain pattern that acts as a fingerprint for those that are more prone to hypnotic influence, and they believe they have found certain factors involving areas of the brain that handle heightened focus and attention. Reduced peripheral awareness also helps to increase the subject’s vulnerability to hypnosis and vastly increases suggestibility.

These conditions can in fact be encouraged in large crowds of people. Consider this for a moment – What daily activity is the average person involved in that hyperfocuses their attention on a single point in space for long periods of time and removes almost all of their peripheral awareness? If you said “cell phone use” then you win a chicken dinner. Beyond creating an artificial and constant low dose of dopamine in the human brain leading to addiction, cell phones and other small electronic devices actually create the perfect conditions for a person to be hypnotized as they rip them away from all peripheral awareness and make them highly suggestible to those who know how to use covert methods.

To reiterate, a hypnotic state can be induced in large groups of people for extended periods of time with the correct long term stimulus. Watch here as mentalist Darren Brown hypnotizes or “brainwashes” an entire shopping mall of people into raising their hands exactly when he wants them to without them being aware of why they are doing it. Notice that around two thirds of the crowd complies.

Hypnotic suggestions last as long as the subjects continue to believe that the suggestions are correct. Hypnotism is essentially an agreement between the hypnotist and the persons being hypnotized that a particular belief is true (even if it is not). In the case of a victim of an attack, the person may want to believe that the traumatic event did not happen, and thus they can be convinced through hypnosis to forget it. In the case of a group of people, the hypnotist would have to identify an idea or fear that they all share and WANT to believe is real, and then exploit it.

I think some of the political applications of this are obvious.

The false left/right paradigm is a perfect petri dish for obtaining or manufacturing the consent of the masses to be hypnotized. They WANT to believe that their team, which they have willingly joined, is the correct team and that the leadership of that team has their best interests at heart. They want to believe that the actions of their party, through legislation or direct means, are always rational and morally sound. And, even when the leaders of their party do things which are completely contrary to the beliefs and morals of the people who make up the party, those people still want to believe that there must be some logical reason behind these decisions that they do not yet grasp.

Beyond this, the threat of the “other party” or team is an ever constant stimulus in the form of fear.  We watch the scripted battles of these two fabricated teams play out in elaborate forms of Kabuki theater, yet nothing ever really changes except that the global elites grow more powerful.  Still, many people actually believe these battles to be real, and invest immense amounts of energy and focus into them as if the fate of the world is being decided within the antics of a political soap opera.

When people are afraid or hyperfocused on an outside threat, they once again become more suggestible. This is why mainstream political discussions focus less on understanding of the threat (the “How” and the “Why”) and more on perpetuating the threat.  With understanding of the enemy (or false enemy), the threat can be assessed and fear is reduced, even if the threat is real. Without understanding, fear only increases. Political powers seek to constantly remind us that threats exist without allowing us the benefit of context.  They do not want us to have an in-depth knowledge of the mechanics behind the threats.

We are told that our system works in a particular way that seems logical, but it only makes sense to us so long as we want to believe that the system functions as we were taught.  We have to have blind faith that what we were initially told was absolutely true.  The question is, why should we?  Isn’t it better to remain skeptical of most things and to study what is handed to us?  If we’re given a strange elixir by an utter stranger and we’re told to “drink up!”, would we not question what’s in the frothing brew and what it does?  Would we not investigate?

In the case of information and proclamations some people would not investigate, because it is more comfortable to believe the lies, or perhaps because they will be rewarded for going along with the status quo.  Only when we become willing to sacrifice comfort, when we stop wanting to accept everything we are told at face value and start questioning the reality that is handed to us, only then will the mass hypnosis we were once influenced by lose its power.

The hypnosis of the elites requires ever increasing forms of distraction and stimulation in order to keep the public entranced. The creation of fear and confusion is vital to the execution of mass mind control, and this is a factor that many people absolutely refuse to recognize or take into consideration. The idea that the elites would build a system only to then deliberately destroy it is just too much for many to fathom. But again, what better way to hyperfocus an entire population and make them malleable to suggestions that they would not normally consider otherwise?

In past articles I have outlined the incredible array of similarities between global elitist groups and the behaviors and character traits of narcissistic sociopaths (also known as narcopaths or psychopaths).  I have even theorized that globalists are actually a highly organized group of narcopaths who recruit other narcopaths into the fold. Many high level narcopaths are intuitively knowledgeable on the dynamics of suggestibility and the human psyche. I would call this their primary survival trait.

Narcopaths are well known for creating confusion around them in order to gain control of the people in their lives or the people in a room. They are also known for being willing to build up certain routines and acclimating people around them to a particular environment, only to suddenly disrupt it all as a means to stun their victims and create subservience. It is important to realize that these people do NOT necessarily care about stability. In fact, they often will actively sabotage stability to obtain something they care about more – control.

The strategies that individual narcopaths exhibit on a small scale are simply magnified thousands of times when we talk about the behaviors of the global elitists. People who consider themselves rational are hard pressed to comprehend this kind of behavior, but there is a devious tactical logic to it. Mind control of others can be achieved by keeping those people infinitely off-balance. Conjuring moments of tenuous peace, and then striking with cycles of unpredictable crisis. Before we know it, many years of instability have gone by and the organized narcopaths in power have gained even more control.  We wonder where all that time went, and why we were not able to change things? It is because we have been hypnotized into inaction, or the wrong actions in the name of meaningless political stagecraft.

Real mind control is not about torture and force, it is about quietly induced acceptance. We can remove our consent from the hypnotists anytime we wish, but we have to be willing to stop ignoring certain realities. We have to be willing to feel the pain that comes when we recognize we have been conned and controlled in the past, and we have to revel in our ability to refuse to conform. It must become a part of who we are – the people who do not take what we are told at face value. The people that question almost everything. The people who cannot be mesmerized.

If you would like to support the work that Alt-Market does while also receiving content on advanced tactics for defeating the globalist agenda, subscribe to our exclusive newsletter The Wild Bunch Dispatch.  Learn more about it HERE.