Tens of thousands, and perhaps now even hundreds of thousands of doctors, nurses, and many other medical professionals worldwide are taking action to combat the misinformation being propagated by governments and government-controlled media that continue to publish false propaganda regarding COVID.

The vast majority of medical professionals worldwide now seem to agree that the COVID “pandemic” and the government actions still being implemented in response to COVID are causing much more harm than COVID itself.

Almost all of these doctors and medical professionals now seem to agree that COVID is no worse than a typical flu season, and the main test being used to supposedly test for COVID, the PCR Test, is not reliable.

The main question left, and indeed perhaps the question from which the answer may very well determine the future fate of our planet, is will enough people in the general public stop believing the lies their government and the corporate media continue to broadcast, using bureaucratic “doctors” who are only “doctors” in name and are instead politicians who hang letters before and after their names (Dr. – MD) to try and give them credibility, but never actually examine real patients nor practice medicine, and instead look elsewhere to find out the truth, particularly from the REAL doctors and medical professionals who have all now figured out that COVID is nothing worth shutting down society over and implementing a New World Order?

These doctors and medical professionals are fighting censorship and ridicule from the ruling classes, the corporate media, and the Big Tech Social Media giants.

COVID is, first and foremost, an INFORMATION WAR, and unless Americans can learn how to turn off their cable news programs with their BILLIONS in funding, mainly from Big Pharma, and take the time to research the issues for themselves, the Globalists will unleash their vaccines and other untested products while also causing social unrest in their effort to implement their New World Order.

Since its publication, at the time of writing of this article, it has been signed by 29,202 Medical Practitioners, 10,576 Medical & Public Health Scientists, and 532,027 Concerned Citizens.

Here is the Declaration:

The Great Barrington Declaration – As infectious disease epidemiologists and public health scientists we have grave concerns about the damaging physical and mental health impacts of the prevailing COVID-19 policies, and recommend an approach we call Focused Protection.

Coming from both the left and right, and around the world, we have devoted our careers to protecting people. Current lockdown policies are producing devastating effects on short and long-term public health. The results (to name a few) include lower childhood vaccination rates, worsening cardiovascular disease outcomes, fewer cancer screenings and deteriorating mental health – leading to greater excess mortality in years to come, with the working class and younger members of society carrying the heaviest burden. Keeping students out of school is a grave injustice.

Keeping these measures in place until a vaccine is available will cause irreparable damage, with the underprivileged disproportionately harmed.

Fortunately, our understanding of the virus is growing. We know that vulnerability to death from COVID-19 is more than a thousand-fold higher in the old and infirm than the young. Indeed, for children, COVID-19 is less dangerous than many other harms, including influenza.

As immunity builds in the population, the risk of infection to all – including the vulnerable – falls. We know that all populations will eventually reach herd immunity – i.e. the point at which the rate of new infections is stable – and that this can be assisted by (but is not dependent upon) a vaccine. Our goal should therefore be to minimize mortality and social harm until we reach herd immunity.

The most compassionate approach that balances the risks and benefits of reaching herd immunity, is to allow those who are at minimal risk of death to live their lives normally to build up immunity to the virus through natural infection, while better protecting those who are at highest risk. We call this Focused Protection.

Adopting measures to protect the vulnerable should be the central aim of public health responses to COVID-19. By way of example, nursing homes should use staff with acquired immunity and perform frequent PCR testing of other staff and all visitors. Staff rotation should be minimized. Retired people living at home should have groceries and other essentials delivered to their home. When possible, they should meet family members outside rather than inside. A comprehensive and detailed list of measures, including approaches to multi-generational households, can be implemented, and is well within the scope and capability of public health professionals.

Those who are not vulnerable should immediately be allowed to resume life as normal. Simple hygiene measures, such as hand washing and staying home when sick should be practiced by everyone to reduce the herd immunity threshold. Schools and universities should be open for in-person teaching. Extracurricular activities, such as sports, should be resumed. Young low-risk adults should work normally, rather than from home. Restaurants and other businesses should open. Arts, music, sport and other cultural activities should resume. People who are more at risk may participate if they wish, while society as a whole enjoys the protection conferred upon the vulnerable by those who have built up herd immunity.

Doctors for Truth Sues the Netherlands 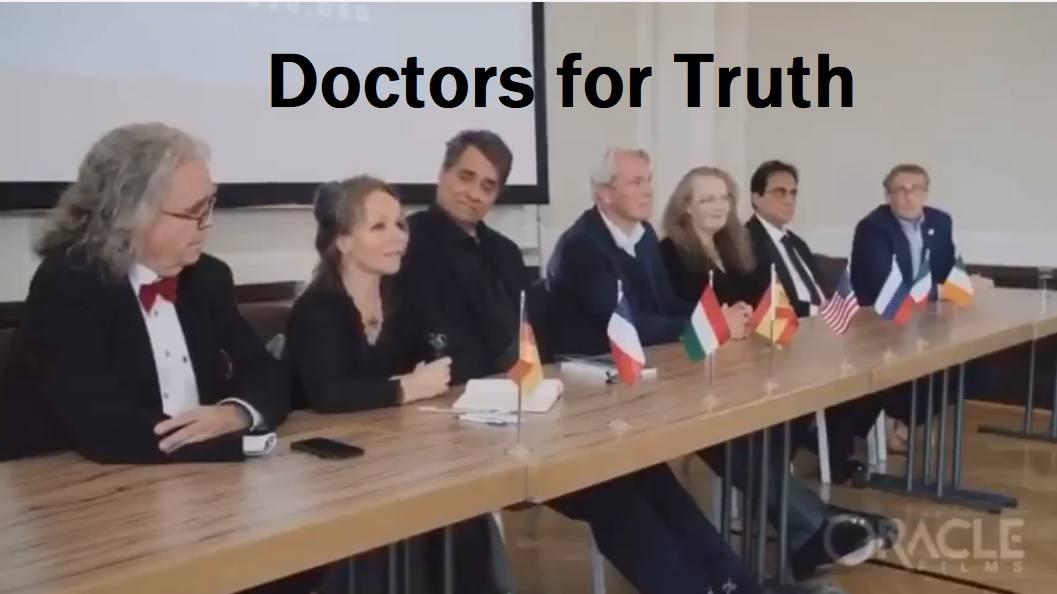 Dr. Elke De Klerk, the founder of Doctors for Truth in the Netherlands, recently appeared with several other doctors from various nations to announce that they were suing the Netherlands for their actions related to COVID which they say has caused great harm.

I want to state that we do not have a medical pandemic or epidemic. We also state that COVID-19 should not be on list A for any longer, because we now know that it is a normal flu virus.

We are also starting a lawsuit to the State of the Netherlands to bring this in with a large group of doctors and a really large group of nurses also, because we have contact with 87,000 nurses that do not want the vaccine that is being prepared for us.

Medical doctors need to stop looking at those tests. Let’s go back to the clinics and the facts.

Listen to the comments of Dr. Klerk:

There are many more of these “Doctors for Truth” around the world.

According to Dr. James Fetzer of Principia Scientific International, there are over 500 medical doctors in Germany called ‘Doctors for Information’ who made a shocking statement during a national press conference recently and stated:

‘The Corona panic is a play. It’s a scam. A swindle. It’s high time we understood that we’re in the midst of a global crime.’

According to Dr. Fetzer:

This large group of medical experts publishes a medical newspaper on 500,000 copies every week, to inform the public about the massive misinformation in the mainstream media. They also organize mass protests in Europe, like the one on August 29, 2020 where 12 million people signed up and several millions actually showed up.

Why do these 500+ medical doctors say the pandemic is a global crime? What do they know, that we don’t?

Dr. Fetzer also stated that in Spain, a group of 600 medical doctors, also called ‘Doctors for Truth’, made a similar statement as the German doctors did during a press conference.

He goes on to write:

Germany and Spain are just two examples. Similar large groups of hundreds of medical experts exist in countries across the world.

In the USA a documentary called PLANDEMIC, which exposes COVID-19 as a criminal operation, is supported by over 27,000 medical doctors!

Why are these thousands of medical professionals worldwide saying the pandemic is a crime? What information do they have access to, that we are not getting from the mainstream media?

When will Americans Stop Listening to Anthony Fauci and other Career Political “Doctors” who Do NOT Even Treat Patients?

Here in the U.S., the Frontline Doctors have exposed the criminal behavior of Anthony Fauci, a career politician who wears the title “Dr.” and his efforts to discredit hydroxychloroquine, which hundreds of doctors have testified to curing COVID patients in conjunction with zinc and an antibiotic. Many of these doctors report a 100% cure rate of COVID patients using this FDA approved drug and the COVID protocol.

Even President Trump has removed Fauci from his Coronavirus task force, but he is still given plenty of air time in the corporate media.

Learn more about the crimes of Anthony Fauci:

Dr. Fauci and the NIH’s History in Experimenting on Foster Children and Using Aborted Fetal Tissue to Develop an HIV Vaccine

I am NOT exaggerating when I state that Anthony Fauci should be arrested on sight, tried in a court of law by a jury of his peers, and if found guilty of mass murder, he should be sentenced to the death penalty.

And yet, this is the man the corporate media mainly uses to convince the American public to obey all the tyrannical COVID mandates that have destroyed our economy, killed millions worldwide, harmed and terrorized most of our children for life by forcing them to wear masks and not congregate in schools or other public places.

Will America ever wake up and turn off the propaganda mind-control devices in their homes called “televisions”?

Will the American public ever come to realize that the national election for President of the United States is nothing more than a media circus show to divert their attention from the real problems facing our nation right now, and that neither candidate has solutions, or even if they did, they are powerless to implement them because they are BOTH part of the same cesspool called the “swamp?”

Joe Biden is a career politician who has done nothing in his career to solve any of these problems, and it appears now that his son is being exposed as being a pedophile with also a very corrupt history.

President Trump, on the other hand, is part of the Wall Street Billionaires that actually run the country, and he has done more to transfer America’s wealth to his buddies in Big Pharma than probably all the previous administrations put together. See:

Is Trump the Most Pro-Pharma President in History? QAnons Continue to Lose Credibility

America’s politicians are part of the problem, NOT the solution!

The only hope for America at this point, is Americans. The issues facing us are moral issues, and the battle is not between political ideologies, but the eternal battle between good and evil.

If you want to learn more about the moral (NOT political) issues we need to address, then head over to Created4Health.org, and start with these articles: