The key difference between a democracy and a republic lies in the limits placed on government by the law, which has implications for minority rights. Both forms of government tend to use a representational system — i.e., citizens vote to elect politicians to represent their interests and form the government. In a republic, a constitution or charter of rights protects certain inalienable rights that cannot be taken away by the government, even if it has been elected by a majority of voters. In a “pure democracy,” the majority is not restrained in this way and can impose its will on the minority.

Most modern nations—including the United States—are democratic republics with a constitution, which can be amended by a popularly elected government. This comparison therefore contrasts the form of government in most countries today with a theoretical construct of a “pure democracy”, mainly to highlight the features of a republic.

What is a Democracy?

What is a Republic?

The term “republic” as used today refers to a representative democracy with an elected head of state, such as a president, serving for a limited term. Even in a republic, it’s the voice of the majority that rules through chosen representatives; however, there is a charter or constitution of basic rights that protects the minority from being completely unrepresented or overridden.

Are a Democracy and Republic Mutually Exclusive?

There are many who make this statement: “The United States is a republic, not a democracy”. This makes it seem like a democracy and a republic are mutually exclusive. They usually aren’t; usually a republic is a type of representational democracy with some checks and balances enshrined in the constitution that safeguard the rights of minorities. A “pure” democracy would imply the rule of the majority in every sphere of life, without such safeguards.

Is the United States a Democracy or Republic?

The U.S. is a republic. Though it is now common for people, including American politicians, to refer to the U.S. as a “democracy,” this is shorthand for the representational republic that exists, not for a pure democracy. The republic continues to be mentioned in the Pledge of Allegiance, which was written in 1892 and later adopted by Congress in 1942 as an official pledge (although “under God” was added later during the Eisenhower administration).

“I pledge allegiance to the flag of the United States of America, and to the Republic, for which it stands, one nation under God, indivisible, with liberty and justice for all.”

While the founders disagreed regarding the role of the federal government, none sought to build a pure democracy.

“We are now forming a republican government. Real liberty is neither found in despotism or the extremes of democracy, but in moderate governments.” —Alexander Hamilton

“It is, that in a democracy, the people meet and exercise the government in person: in a republic, they assemble and administer it by their representatives and agents. A democracy, consequently, must be confined to a small spot. A republic may be extended over a large region.” —James Madison

There are several political implications that arise from the U.S. being a republic. Laws passed by the majority — through their representatives in government (federal or local) — can be challenged and overturned if they violate the U.S. constitution. For example, Jim Crow laws mandating racial segregation were deemed unconstitutional and were repealed, and in Brown v. Board of Education, the U.S. Supreme Court repealed state-sponsored school segregation.

In 1967, with Loving v. Virginia, the Supreme Court overturned all remaining anti-miscegenation laws which banned interracial relationships, including marriages. In the 1800s, however, the court had ruled in favor of states’ rights to ban interracial sex, cohabitation, and marriage. This illustrates the power of cultural mores, which influence the interpretation of the constitution.

In more recent cases, the 2010 healthcare reform bill (a.k.a. Obamacare) was challenged in the U.S. Supreme Court because it forces individuals to buy health insurance. The law was passed by a majority in Congress, but critics claim that it violates individual liberties by forcing individuals to engage in commerce, a power that the government does not have in this republic. Ultimately, the Court ruled the individual mandate was constitutional but that states should not be required to expand Medicaid.

Another example is California Proposition 8, a state constitutional amendment in which a majority of voters in California voted to make same-sex marriages illegal. Critics of the law argue that this violates the individual liberties of gay and lesbian couples, and the majority does not have a right to do that in a republic. While courts in California upheld the amendment deeming it constitutional, a federal court overturned it, judging that it was unconstitutional under both the Due Process and Equal Protection Clauses of the Fourteenth Amendment.

If the U.S. was not a republic, laws passed by the government (elected by majority) could not be challenged. The Supreme Court (and, indeed, lower courts too) can determine which laws are constitutional and has the power to uphold or overturn laws it judges to be unconstitutional. This demonstrates that the rule of law and the U.S. Constitution are higher authorities than the will of the majority at any given time.

History of Democracies and Republics

Democracies are older than republics. Pinpointing which place or people had the world’s first democracy or republic, however, is difficult. Many countries, tribes, and cultures had at least some democratic or republican procedures. For example, voting on community matters, electing elders to power, and even creating rules regarding individual rights have occurred on small and sometimes larger scales.

Even so, the most well-documented early democracy was found in Athens, Greece, and established around 500 BCE.[2] Under Athenian democracy, the people voted on every law. This was a pure or direct democracy where the majority had nearly complete control over rights and progress.

The most well-documented historical representational republic is the Roman Republic, which developed shortly after Athenian democracy, again around 500 BCE. The rule of law favored by the Roman Republic remains popular in most of today’s governments. It is worth noting that the Roman Republic had an unwritten constitution that was constantly adapting to changing principles.[3]

Despite the common use of the word “democracy” and the desire to “spread democracy,” most countries throughout the world today govern as republics. However, republics differ widely, with some operating under a presidential system, where the people directly or nearly-directly elect a president who is the head of the government; a parliamentary system, where the people elect a legislature who decides the executive branch; and even constitutional and parliamentary monarchies that tend to behave as republics but often have royal figureheads. 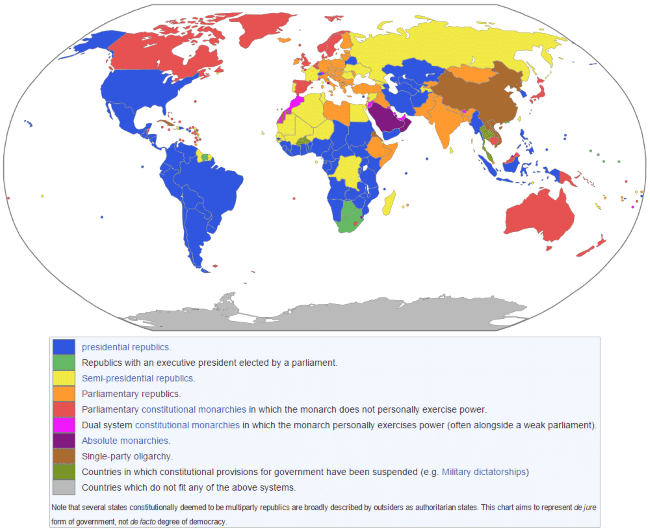 Click to enlarge. A map showing the many different kinds of republics in the world today.