July 08, 2022: Information Clearing House — All Empires end in ignominy. That of the United Kingdom is drawing to a close.

A century from now, the dominant historical narrative will be Chinese and Chinese historians will puzzle over how a prime minister, Boris Johnson, fell from office over a lie about what he knew of sexual harassment by a very junior member of his government.

Learned papers will be written over whether this was truly the cause, or whether the underlying socio-economic crisis caused by inflation and Brexit was the real determinant.

Chinese books (or their technological equivalent) will be written on the crisis of neoliberalism and how Western society reached unsustainable levels of concentration of capital and wealth inequality.

Acres have been written in the mainstream media about Johnson’s lying and personal immorality, but there is very little serious effort to understand why so many in society have been prepared to tolerate this. The answer is that neo-liberalism has succeeded in destroying societal values, to the extent that anti-social and even sociopathic behavior no longer appears peculiar.

In a society where authority condones, and constructs a system to enable, personal fortunes of $200 billion or more while millions of children in the same country are genuinely hungry and poorly housed, what values is the socio-political structure telling people to hold? What value is placed on empathy? Ruthless ambition and resource grabbing is applauded, encouraged and held up as the model to be followed.

More and more, you are either part of the elite or you are struggling.

In the U.K., the Thatcherite dream of mass property ownership is abruptly canceled. Social mobility and meritocracy are changed from an opportunity for large scale social advancement by multitudes, into Hunger Games. Where significant numbers of young people see their best shot at financial comfort as selection for “Love Island,” how do we expect them to be repulsed that Johnson was having multiple affairs while his then wife was struggling with cancer?

Johnson is explicitly a devotee of the great man theory of history. But in fact his startling political career is in itself merely a symptom of the decline of the United Kingdom, from great Imperial power to the breakup of the metropolitan state (the latter of course started to take formal effect in 1921).

Brexit was just a convulsion, as the United Kingdom went through the psychological trauma of accepting its change in status from great power to reasonably senior European state. There is a great treatise to be written on this and the consequent wave of populist English nationalism.

You may like to note the constant Tory use of the phrase “world-leading” in risible circumstances; the fact that even yesterday Keir Starmer, leader of the opposition, felt the need to comment on government collapse while planted between three Union Jacks; the constant militarism and fetishizing of the armed forces on TV, and the desire for reflected glory by fighting a great war to the blood of the very last Ukrainian.

Peter Oborne’s meticulous compilation of Johnson lies shows how peculiar it is that the crisis should come over a comparatively minor lie about knowledge of bad sexual behavior, in which Johnson for once was not personally involved. But it is quite wrong to think of Johnson as unique. Oborne’s wonderful book The Rise of Political Lyingchronicles the massive attack on governmental standards perpetrated by the charlatan Tony Blair, a former prime minister.

Johnson is just a part of a process. As the power of an Empire disintegrates, so do its mores. Since the second world war, over 60 states have become independent of British rule. The pink bits on the map (“this colony is where your tapioca comes from”) they showed me so proudly at primary school have shrunk and shrunk and shrunk. Thank God children are no longer taught to sing “Over the seas there are little brown children” in need of conversion (I really was taught that, I am not making stuff up).

As the U.K.’s military, economic and political power have collapsed, so have its political mores — both for good and for bad. Johnson is but a turd spewed to the top of the gushing sewer of British decline.

Every one of those 60 states that have left British rule, was warned that it would struggle without the U.K. No state has ever wanted to return to British rule. Fellow Scots, take note.

I also want to make plain to my English readers — and remember I am half English myself — that I genuinely believe the breakup of the highly artificial British union will be very beneficial to England. Scottish independence and Irish reunification are coming soon. Welsh independence is fast gathering support.

It will take the break-up of the U.K. to jolt the great power nostalgia and silly patriotism that underlies so much of Tory support — and that of other right wing Union Jack fetishists like Starmer.

Only the shock of the formal closure of the British state will precipitate the psychological change needed for England to become a modern, forward looking, middle-ranking European state with concern for domestic and international fairness.

The U.K. has been in socio-political turmoil since 2016 and is now entering profound economic crisis. These very days are the end-time of the United Kingdom. Rejoice!

I shall leave the last word to that great radical Percy Bysshe Shelley: 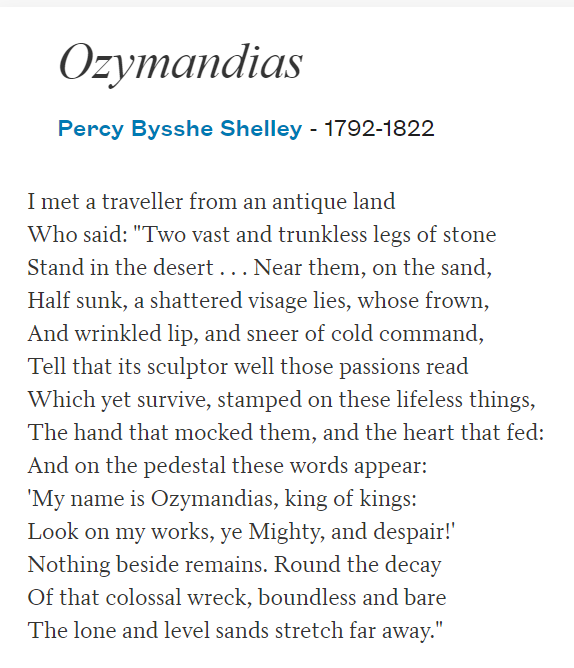 Craig Murray is an author, broadcaster and human rights activist. He was British ambassador to Uzbekistan from August 2002 to October 2004 and rector of the University of Dundee from 2007 to 2010. His coverage is entirely dependent on reader support. Subscriptions to keep this blog going are gratefully received.

This article is from

Craig Murray is an author, broadcaster and human rights activist. He was British ambassador to Uzbekistan from August 2002 to October 2004 and rector of the University of Dundee from 2007 to 2010. His coverage is entirely dependent on reader support. Subscriptions to keep this blog going are gratefully received.

The views expressed in this article are solely those of the author and do not necessarily reflect the opinions of Information Clearing House.