TRAIN T157, SOMEWHERE SOUTH OF CHANGSHA – A bank may be about to collapse in Henan Province. The Wall Street Journal reports that angry depositors were demanding their money last week.

Three banks have already collapsed in China this year.

I also read a steel company – Xiwang Group – defaulted on its bonds last week. Then bond prices of two other companies from the same region crashed in response…

Boots on the Ground in China

Greetings! My family and I have been traveling around China for the last seven weeks, seeing the major tourist sites, making friends with the locals, and sampling the food.

I’ve also been doing a casual boots-on-the-ground assessment of China’s economy. I can’t help myself. It’s such an interesting place.

We just traveled from Beijing to Guilin, a distance of 1,200 miles. It’s a 24-hour ride. Here’s Penny (7) in our sleeping compartment… 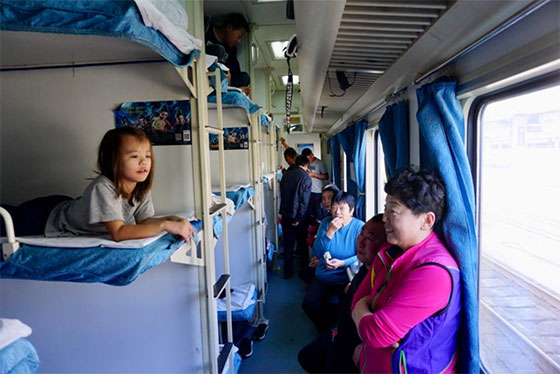 Traveling through China by bullet train

First, there is a massive and ongoing construction boom. The Chinese are building expressways, railways, bridges, and tunnels. But mostly they’re building apartment buildings.

In every town, city, and village all over China… Tens of thousands of high-rise condo towers are under construction right now. 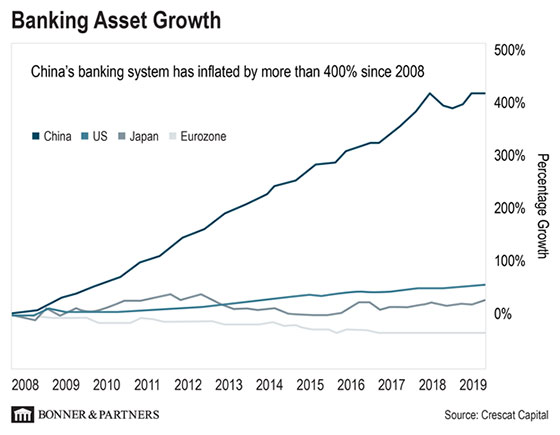 As we’ve traveled around, we’ve seen many empty trains, empty waiting rooms, empty buildings, and expressways with no traffic, even at rush hour. These projects aren’t economic yet. They may never be.

They’ve stuffed China’s banking system with too many bad loans. This is why Chinese banks keep collapsing.

Third, the Chinese currency feels overvalued. I can tell you this only because I’ve just traveled around the world, and I’ve got a good feel for currency overvaluation and undervaluation.

So far, there isn’t an inflation problem in China. But the Chinese currency (the renminbi) isn’t freely convertible, and it does not exist outside China. The dollar, by contrast, is deposited and used all over the world.

Only 1.8% of global payments are denominated in renminbi. The dollar accounts for 40%. The euro accounts for 34%.

Which brings me back to bank failures and bond defaults. When the world economy slides into recession, defaults and bank failures will become more frequent. It might even become a credit crisis.

The Chinese government, of course, will paper over any losses with printed money and bailouts.

But this is the thing… Property prices are already inflating like crazy. But now everyday costs are starting to rise, too.

The bottom line is that China has to devalue its currency. It’s already happening. This summer, the yuan went below seven USD for the first time since 2008.

What I don’t understand is why no one buys gold here. I’ve asked a dozen people about gold. I’ve gotten back only blank stares.

As far as I can tell, there’s no culture for investing in gold. Which is strange, because it’s so easy to buy gold here. (The banks sell gold over the counter at very competitive prices.)

Anyway, we’ve still got another week in China. Hopefully, I’ll be able to speak to a few more people before we leave. Then we go to Hong Kong, which may offer some clues of its own…

Like what you’re reading? Send your thoughts to feedback@bonnerandpartners.com.

In today’s mailbag, coal burners that may not be coal burners… how Tom’s “all in” motto applies to life outside of investing… and why he didn’t just fly straight to Paris back in ’02…

Reader comment: I love the plain and simple descriptions Tom gives of his travels with his family around the world. Those descriptions also show the warmth and affection with which he surrounds his children and wife. Thursday’s postcard made me feel better about the world, the people in it, and the future. Tom is the kind of person whose outlook is infectious and contagious, and he writes brilliantly. Please continue your postcards.

Reader comment: You BOTH deserve a medal for your courage, and I’m so happy for you both and the children.

Reader question: I like the travel stuff and the changes you ALL are experiencing on the road. You said earlier you tend to go “all in” on things you are involved in… your Dow-to-Gold ratio… this travel thing, etc.

My question is… When you return, will you be able to split your focus and keep your relationship with your wife and family AND participate in the financial markets? You’re in a kinda bubble…

Tom’s response: It’s a great question. I like to think “all in” applies only to my money management strategy. But you’re right, we have so much to resolve still.

I don’t know what life’s going to be like when we come back down to earth, but I’m excited to find out. I’m just so happy I’m back with my family.

Reader comment: The picture of coal burners near where you are staying may in fact not be coal burners. Those are likely cooling towers, and what looks like smoke is actually steam, or if you prefer, water vapor. Nuclear power plants have cooling towers and also put out steam.

Reader question: I love your postcards. I haven’t read them all, but I was wondering. Do you have to check in with the local police in every city that you visit in China?

Tom’s response: No. But we think they’re tracking us with facial recognition cameras. And the hotels take copies of our passports.

Reader question: Your postcards are fascinating… I dig through my long list of emails every day to find the latest one.

But I’m curious about something you touched upon a couple of times. When you had the opportunity for a job interview, you needed to travel to Paris. And “To get to Paris, I’d need to hitchhike from Alabama to Mexico City, fly to London, shave, put on a suit, and take the Eurostar train to Paris.”

Why did you have to go to Mexico City to go to Paris? Are there no flights from, say, Atlanta? Best wishes – and keep up the commentaries.

Tom’s response: I already had booked a ticket back to London, and I didn’t want to waste money.

Reader comment: Love your reports, and thank you for educating me about the distant places you are visiting.

Got a kick out of your kids’ ever-present curiosity to check out new digs even after having visited so many. Adults have much to learn from the freshness of their perception.

Tom’s response: Thanks for all the kind notes. Kate and I read every one. Keep sending us your questions and comments at feedback@bonnerandpartners.com.

Please note we’ll never give your name or any potentially identifying details away if we decide to publish your note.