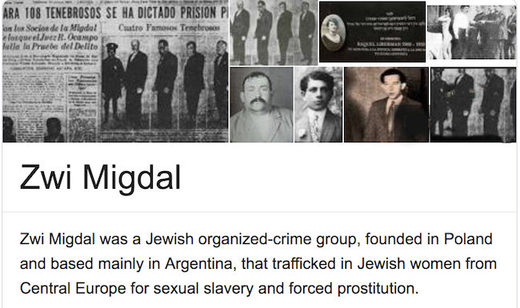 The story of Jeffrey Epstein has lost its mystery as more and more commentators allow themselves to express the thought that it is a strong possibility that Epstein was connected to a crime syndicate affiliated with a Zionist political organisation or Israel and/or at least a few compromised intelligence agencies. Whitney Web and others have produced superb studies of possible scenarios, I would instead like to attack the topic from a cultural perspective. Epstein wasn’t the first Jewish sex trafficker. This seems like a good time to look back at Zwi Migdal, a Jewish global crime syndicate that operated a century ago and trafficked tens of thousands of Jewish women and under age girls as sex slaves. According to contemporary Jewish writer Giulia Morpurgo the Zwi Migdal had turned Argentina, “into a nightmare of prostitution and exploitation.”

In 2009 The International Jewish Coalition Against Sexual Abuse/Assault (JCACA) published a comprehensive article about the Zwi Migdal titled Understanding the Zwi Migdal Society which I am about to quote from extensively.

The Zwi Migdal, was an association of Jewish mobsters who were involved in the “sexual exploitation of Jewish women and children, which operated globally.” Apparently the Zwi Migdal originally picked a pretty innocent sounding name: “Warsaw Jewish Mutual Aid Society.” It does indeed sound almost as innocent, humane and charitable as ‘Anti Defamation League,’ ‘Jews against Breast Cancer,’ or even ‘Jewish Voice for Peace’ but the Warsaw Jewish Mutual Aid Society wasn’t innocent at all. It forced thousands of women and girls to become sex slaves and destroyed their lives.

On May 7, 1906, the Jewish syndicate had to change its title after the Polish ambassador to Argentina filed an official complaint to the Argentine authorities regarding the use of the name ‘Warsaw.’ Clearly, the Polish government did not want to be associated with a Jewish crime syndicate. In that line, it would be appropriate to ask how long is it going to take before the American government and its politicians insist that AIPAC drop its first ‘A’ or before The Neocon Project of the New American Century are ordered to drop American from their title.

“Zwi Migdal means ‘strong power’ in Yiddish and it also honoured Zvi Migdal, known as Luis Migdal, one of the founders of the crime organization.”

The Zwi Migdal organization operated from the 1860s to 1939. In its heyday, after the First World War, it had four hundred members in Argentina alone. Its annual turnover was fifty million dollars in the early 1900s.

Unlike Epstein and Maxwell who allegedly recruited non-Jewish underage women, the Zwi Migdal specialised in trafficking Jewish women. “Most of the Jewish women and children who were kidnapped were taken from impoverished shtetls (Jewish small towns) and brought to Buenos Aires.”

The recently released documents related to the Jeffrey Epstein affair suggest that Epstein and Maxwell were to be charged with child sex trafficking, and as the alleged procurer of underage girls. It seems none of that is really novel in the Jewish world: “The Zwi Migdal Society lured decent girls and young women from Europe in many inventive and deceitful ways. A very well-mannered and elegant-looking man would appear in a poor Jewish village in places such as Poland or Russia. He would advertise his search for young women to work in the homes of wealthy Jews in Argentina by posting an ad in the local synagogue. Fearful of pogroms and often in desperate economic circumstances, the trusting parents would send their naïve daughters away with these men, hoping to give them a fresh start.”

The last line recalls Virginia Giuffre’s account of her encounter with the elegant British socialite Ghislaine Maxwell who allegedly lured her victims to ‘escape’ their misery.

The JCACA continues “The girls, aged mostly 13 to 16, packed a small bag, bade their families farewell and boarded ships to Argentina, believing that they were on their way toward a better future. However, they soon learned the bitter truth. Their period of training as sex slaves, which began on the ship, was cruel and brutal. The young virgins were “broken in” ~ raped, beaten, starved and locked in cages.”

The Zwi Migdal Organization reached its peak in the 1920s when some 430 rufianos, or pimps, controlled 2,000 brothels trafficking around 30.000 Jewish women and girls in Argentina alone. “The largest brothels of Buenos Aires housed 60 to 80 female sex slaves. There were brothels all over Argentina, but most of them were in the big city, in the Jewish quarter, on Junin Street.”

Apparently “Prostitutes who failed to satisfy their clients were beaten, fined, or taken to work in provincial houses. Every business transaction was logged. The rufianos ‘held a meat market’ where newly arrived girls were paraded naked in front of traders in places such as Hotel Palestina or Cafe Parisienne.”

One may wonder how all of that fit with Judaic tradition and Talmudic law. “In one brothel,” the ACACA reports, “the Madam, an observant Jewish woman, would not let her women work on Fridays but instructed them herself in the art of lovemaking.”

Many commentators on the Epstein affair are amazed by the incapacity of America’s law enforcement, legal system and federal agencies to bring justice to Epstein’s victims and its failure to lock him away. Once again, that is not new. The JCACA writes of the Zwi Migdal criminality: “These activities went on undisturbed because they were frequented by government officials, judges, and reporters. City officials, politicians, and police officers were paid off. The pimps had powerful connections everywhere.”

The Jewish community didn’t rush to save their abused daughters. “The prostitutes, who were mostly illiterate, destitute and despised by the mainstream Jewish community, banded together to form their own mutual-aid societies.” However, rarely, some Jewish ethnic activists stood for the abused women and girls. “One night Nahum Sorkin, a well-known Zionist activist, stood outside the theatre and physically stopped the rufianos (Jewish pimps) from entering. Next, they were banned from the synagogues, and to top it all, they were refused burial in the Jewish cemetery.”

We learn that the rufianos’ audacity eventually led to their demise. “It happened when they refused to forgo their income from the work of one woman, Rachel Lieberman from Lódž, Poland. She, like so many others, was tempted to travel to Buenos Aires answering a matrimonial ad, but was taken to Jonin Street where she was forced to prostitute.”

“After five years she had enough money to go into the antique furniture business to support herself and her sons but the rufianos made it impossible for her. They did not want her to set an example for their other slaves. But this woman had not been broken.”

As was the case for Virginia Giuffre, it needed brave Rachel to come forward.

RAQUEL: a marked woman – Excerpts from Jonathan Brock on Vimeo.

In desperation, Rachel Lieberman “contacted Superintendent Julio Elsogray. She had heard his name mentioned on the street as one who would not take Zwi Migdal’s money and was actually looking for ways to destroy the organization. She slipped into his office one day and gave a detailed account of the connections among the various pimps in the organization management.

Her testimony led to an extensive investigation. The findings reached Dr. Rodriguez Ocampo, a judge who would not take Zwi Migdal bribes either.

The lengthy trial ended in September 1930, with 108 detainees. “The very existence of the Zwi Migdal Organization directly threatens our society,” the judge wrote in his verdict, handing down long prison terms.”

As with Epstein and his mobsters friends, things changed quickly and not in favour of justice let alone guided by ethical principles. The Zwi Migdal mobsters were at least as well connected as Epstein to politicians, judges and prosecutors. “While in prison, the pimps pulled some old strings, appealed their sentences in January 1931, and senior Justice Ministry officials left only three of the convicts in jail, discharging the rest.”

As was the case with The Miami Herald’s Julie Brown and many of us in the alternative media who didn’t allow the rotten Epstein and his pedophile ring’s crimes to be shoved under the carpet, the 1930s Argentinian media didn’t agree to turn a blind eye to the Jewish syndicate’s impunity.

When the media reported the release of the Zwi Migdal’s mobsters from jail, “the public was very upset and pressured the authorities to reverse the discharge decision. Thereafter, hundreds of pimps were deported to Uruguay. “Over the years, they slowly returned one by one, but the era of the huge brothels ended.”

The JCACA sums up the Zwi Migdal saga by stating that the Jewish crime syndicate was “an organization that traded in women while its members wore tefillin (a Jewish religious garment) and built themselves a synagogue.” I guess the same can be said about Epstein’s ring. They may not be religious, they may not wear Tefillin but they are self identified Jewish Zionists who donate to Israel and vocally support Israel’s criminal politics.

The JCACA proclaims that the Zwi Migdal’s “history is an embarrassment to all decent Jews. It involved loads of money, corrupt politicians, violent sex, international women trade, hard brutality, rape, and cheating, all lightly spiced with yiddishkeit and God-fearing traditions. Among those traditions, according to Jewish beliefs as expressed in the Torah, is that it is perfectly fine to keep slaves so long as they are not Jewish. Yet these Zwi Migdal also enslaved Jewish girls and a great many who ran the bordellos were Jewish women.”

I find myself admitting that except for Benjamin Netanyahu who denounced Ehud Barak for his ties with Epstein for political opportunist reasons, I have yet to see a single Jewish organisation express any embarrassment in regard to Epstein and his sex trafficking operation. On the contrary, Epstein’s lawyer, Alan Dershowitz, announced that he is actually a victim of the #metoo movement. He also occasionally insists that Jews should never apologise for using their strength. Maxwell has kept quiet. Wexner has yet to apologise. Like Dershowitz, he adopted the victim path announcing that Epstein ‘misappropriated’ a few shekels from his family and he regret being associated with the sex trafficker. JVP that cares so much for Palestinians must be slightly less bothered by Guiffre’s plight. I am left wondering, is it the fact that Zwi Migdal abused Jewish women and girls that provoked Jewish discomfiture? I guess that, at least for the time being, it seems as if Jews do not posses the cultural or psychological means to look reflectively into Epstein and his ring. The only question left open is whether the FBI has the cojones to do its job.

Comment: Time after time, we have seen how government officials collude with criminals to protect human trafficking networks – they operate with impunity all over the world:
Keep Up to Date