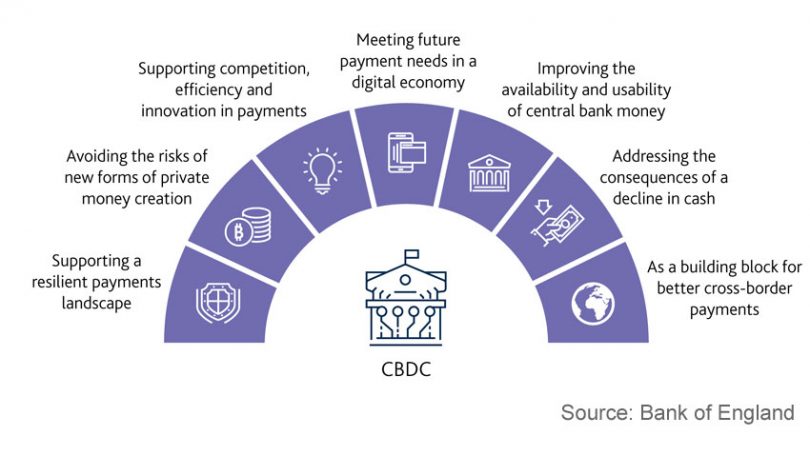 The paper starts by outlining one of the drivers behind a consumer-focused Central Bank Digital Currency (CBDC) – the declining use of cash.

The report highlights both the opportunities outlined in the diagram and the usual risks.

Outgoing Bank of England Governor, Mark Carney, raised the stablecoin issue in the paper’s forward: “It could ensure that the public has continued access to a risk‑free form of money issued by the central bank, which may be especially important in the future as cash use declines and new forms of privately issued money become more widely used in payments.”

In terms of risks, if consumers move deposits into a CBDC, this could create problems for commercial banks. It would impact the ability of banks to advance loans. And ultimately this could affect financial stability and the ability of the central bank to control monetary policy.

Last week Deputy Governor of the Bank of England, Sir John Cunliffe, gave a speech about money in which he highlighted this challenge of potentially reducing commercial bank lending as the most important issue. He stated that money has always evolved and it’s something that can’t be held back.

The Bank plans to explore a model that involves the central bank running the core infrastructure, which runs alongside the Real Time Gross Settlement (RTGS) system. But the distribution of CBDC to consumers would be via payment intermediaries who, in turn, pass the digital cash onto consumers. The Bank also envisages these Payment Interface Providers as adding functionality that is not in the core ledger.

That ledger may or may not use distributed ledger technology (DLT). While DLT offers potential for innovation, the Bank has concerns over performance, privacy and security. A CBDC could provide programmable money that use smart contracts.

Several areas will be addressed in research work. These include the impact on payments and whether a CBDC could complement current improvements in payments systems that already in process.

The Bank wants to quantify the impact on monetary policy and financial stability. It plans to flesh out the functionality in a CBDC and the split between the roles of the public and private sectors.

And finally, the Bank plans to determine the most appropriate technology.

The Bank is also collaborating with five others and the Bank for International Settlements to share its research.

Image Copyright: Bank of England
Keep Up to Date