HEALTH MINISTER SIMON Harris has said social media companies “need to decide which side they want to be on” in terms of the spread of misinformation about vaccines.

Harris has written to companies such as Twitter, Facebook and Google asking them to engage in talks about how to tackle the spread of misinformation online.

Harris today said that social media platforms should ban certain accounts and consider giving “badges” to accounts that are reputable and provide authentic information about vaccinations.

“These are matters that I want to discuss with them, but I think they’ve already shown a willingness, on occasion, to delete accounts.

“I also think that they can do more than that, I think they could use what is a very powerful platform to help signpost people … they could perhaps badge certain accounts as reputable sources of information.

“I want to know as a parent, let alone as the Health Minister, if I’m actually reading a tweet, if I’m reading a website, is this a reputable website? And is there a way of us working in tandem with them to help accredit or badge certain websites as reputable source of information?”

Harris said a number of companies have been invited to a summit at the Department of Health to discuss the best approach.

Four European countries have recently lost their measles-free status. When asked if the same could happen in Ireland, Harris says we need to be worried about uptake rate of MMR vaccine. #VaccineAlliance 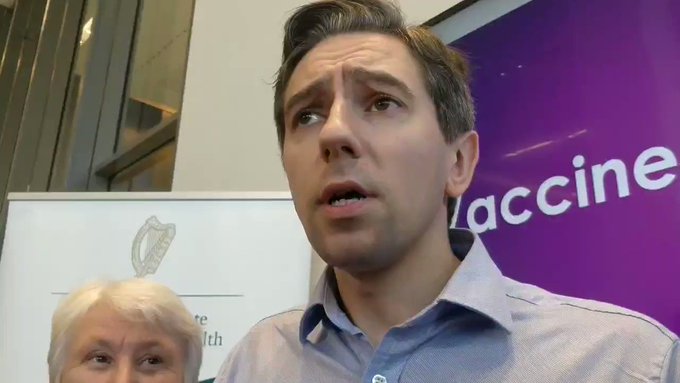 Harris says social media companies “need to decide which side they want to be on” in terms of spread of misinformation about vaccines; says some accounts should be shut down, while others could receive badges to show they are authentic sources of info. #VaccineAlliance 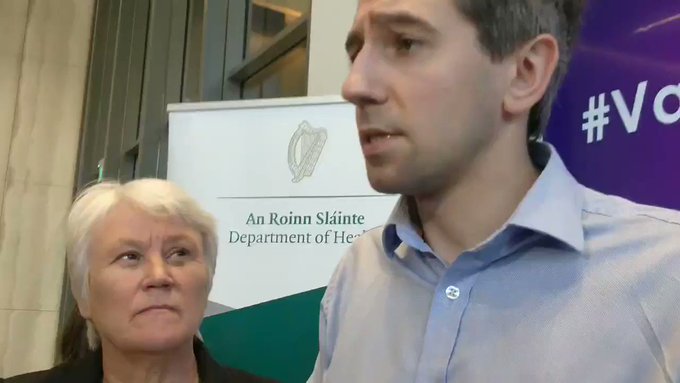 22 people are talking about this

Responding to Harris’ remarks, a spokesperson for Facebook, which also owns Instagram, said the company has an action plan “to combat vaccine misinformation“.

The spokesperson said that when vaccine misinformation is identified in a post, its ranking is reduced on both Facebook and Instagram. The groups and pages in question are not included in recommendations or in predictions when a person searches the two websites.

“When we find ads that include misinformation about vaccinations, we will reject them … For ad accounts that continue to violate our policies, we may take further action, such as disabling the ad account,” a statement read.

It added that certain hashtags, such as those which falsely link vaccines to autism or other illnesses, are banned.

The spokesperson said it should be noted that “misinformation about vaccines is not the same as the anti-vax movement”.

The concept of people who have opinions against vaccines is not something we’d take action on. We allow people to express their opinions on Facebook and Instagram but will take action when content violates our policies or endangers others.

Facebook is also starting to roll out education units that provide more context about vaccines and “connect people to credible information” from organisations such as the World Health Organization, the statement noted.

Harris made the comments at the launch of the Vaccine Alliance – a network of healthcare professionals, policy makers, patient advocates, students, and representatives from groups most affected by vaccine hesitancy.

The goal of the network is to boost the uptake rate of childhood vaccines. Its membership will be finalised between now and December.

The alliance will work with people in vulnerable groups who may have issues accessing healthcare, such as people who are homeless or members of the Travelling and Roma communities.

Minister Catherine Byrne, like Harris, thanks Laura Brennan and her family for their work in raising awareness of the importance of vaccines. 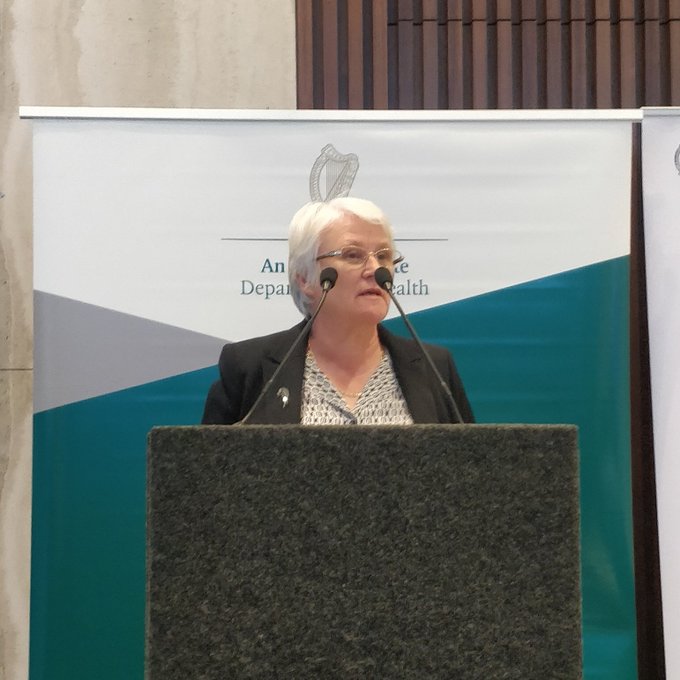 Byrne says recent outbreaks of diseases such as measles in Ireland highlight how important it is to vaccinate children; says people in vulnerable groups such as members of the Travelling and Roma communities, who may have issues accessing healthcare, need to be included.

Harris said the “immense suffering” experienced by children and families 50 years ago “should act as a constant reminder that we need to keep promoting and investing in our vaccination programme”.

Vaccination rates across the country are falling and diseases we had consigned to the history books are now making a comeback. We cannot afford to do nothing. We cannot allow the success of our childhood immunisation programme become its enemy.

Four European countries including the UK recently lost their measles-free status and there are fears Ireland could follow suit.

When asked about this, Harris said: “I think we need to be worried about the uptake of the MMR vaccine. In general, we’ve seen an increase in the number of cases of mumps, a very significant increase, about 1,000 extra cases this year so far. In relation to measles … the figure for this year (so far) is alarming, it’s about 56 already.”

Most cases in Ireland to date this year were among children, however there were 17 cases among people aged 20-44. Thirty-one cases involved males and 25 cases related to females.

The so-called anti-vax movement — driven in part by completely disproven claims linking the MMR vaccine against measles, mumps and rubella, to a risk of autism in children — has increasingly gained traction in recent years.

“It’s not just a job for the health service to keep Ireland’s measles-free status, but also just to keep our kids safe. We all have a responsibility to work together,” Harris said.

“The health service can do so much. And I must say, in fairness to the HSE, I think the efforts have been incredible – herculean, to use the Taoiseach’s reference (when speaking to Boris Johnson yesterday).

“But at the end of the day, this is a matter of personal responsibility. It’s about a decision that you and I make for our children, for the next generation.”

Harris is considering bringing in mandatory vaccinations, as some other countries have, but said this could be “constitutionally complex” – particularly in relation to potentially banning unvaccinated children from attending school.

“I want to win the argument. I want parents to be satisfied that the facts are on the side of vaccination, that getting your child vaccinated is a great gift for your child’s health now and into the future.

I do have a very open mind in relation to the issue of mandatory vaccines. I see this as something that’s been raised in lots of other countries and I think Ireland needs to be part of that debate.

“To me, it is irresponsible. It does not sit well with me that you would send your child to a creche without that child being vaccinated knowing that not only you’re putting their health at risk, but you’re putting other the children’s health (at risk).

“When it gets to the issue of schools, obviously people have a constitutional right to an education. So these are rights that need to be balanced. But there’s also a public health issue.”

Harris said he is considering advice from the Attorney General and the Health Research Board in this regard and will make his views known by the end of the year.

Byrne says recent outbreaks of diseases such as measles in Ireland highlight how important it is to vaccinate children; says people in vulnerable groups such as members of the Travelling and Roma communities, who may have issues accessing healthcare, need to be included.

Minister Harris says he has an “open mind” in terms of mandatory vaccinations and has received legal advice from the Attorney General which he will consider. #VaccineAlliance 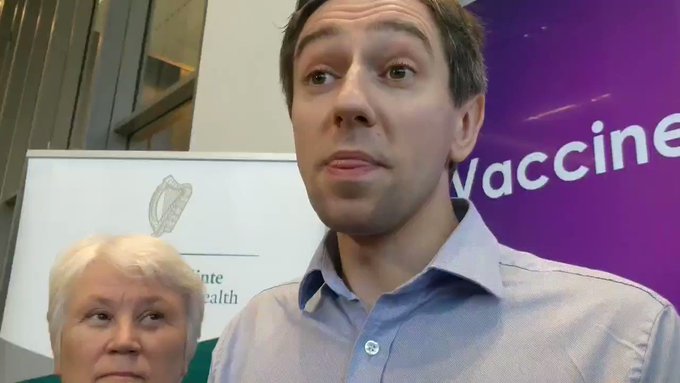 Harris said the alliance aims to build on the success of the HPV vaccine, where uptake rates recently increased from 51% to 70% after a campaign.

The advocacy of Laura Brennan, who died from cervical cancer in March, was a large part of this success, Harris said. He thanked Laura and her family for raising awareness of the importance of getting the HPV vaccine. Laura’s parents attended today’s launch at the Department of Health. 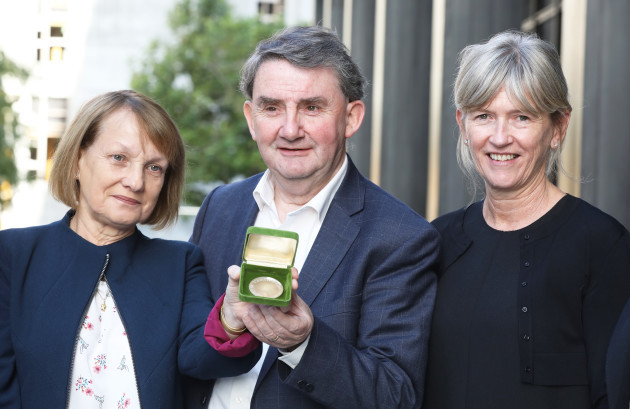 Harris also announced that the Royal College of Physicians of Ireland has renamed its Medal for Patient Advocacy the ‘Laura Brennan Advocacy Medal’ in recognition of her advocacy work.

Contribute to this story:

Man and woman arrested after high-speed chase and collision with garda cars
1,503 Views

Dublin restaurant forced to close after live cockroaches were found on a container of nuts during food safety inspection
104,770 Views

I’m pro vaccination but this is ott, what’s next the state telling us where to get our news from, what t.v. to watch? People are free to make the choices they want within the confines of the law, vaccines are not mandatory by law, therefore people are allowed to make their own choice.

@Rachel O’ Meara: But maybe they should be. Why should a kid who can’t receive a vaccine (immuno-compromised or other serious contra-indications) literally have their life put at risk because Ken read on the interwebz that “big pharma are pushing vaccines and wasn’t there that doctor that one time something autism something.”

@Lúnasa Healy-Rae-Nua: Then the government should change the law and not dictate what people read or watch.

Be great to ban all the misinformation and spin from Fine Gael too while their at it.

@Bull McCabe: wont happen as long as they have RTE.

I wonder what Harris would say to the 80+ people with cases before the High Court taking cases against the state because they developed narcolepsy after receiving the rushed into production swine flu jab??

The only INFP in Ireland6m

@Mill Lane: He’d probably write them off as liars.

@Mill Lane: Harris and ffg as well as lab should be jailed for the blatant lies and tripe that spews from their mouths.
If one of these parasites told me it was raining I would have to check it for myself.
I wonder if there is a vaccine against parasites like them ?